One of my favorite reading challenges this year is Kid Lit Frenzy’s Nonfiction Picture Book Challenge. Visit her blog to learn more about the fantastic diversity of nonfiction picture books.

I don’t remember a time when I wasn’t just a little bit in love with Ernest Shackleton and the story of the Endurance. What a story it is! Shackleton and his crew set sail from England to Antarctica, intending to hike across the continent because hey, why not? Their ship, the Endurance, gets trapped and crushed by pack ice, stranding the crew on an ice floe more or less literally at the end of the earth. The Endurance itself doesn’t endure, but certainly endurance is the apt theme for Shackleton’s expedition. Again and again, you think Shackleton and his crew are done for, and yet they manage to survive–every single one of them. In the annals of doomed Polar exploration, that’s quite a feat. 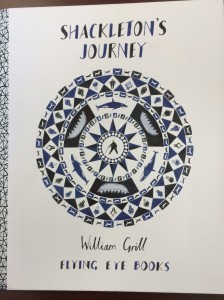 William Grill’s new Shackleton’s Journey was a must-read for me, and I found it a delightful book. Surviving photos taken by the expedition photographer, Frank Hurley, have given us certain iconic images of the expedition and the fate of the Endurance. Surely that’s some of the appeal of this story–that an already captivating narrative comes with such strong visuals. I loved that Grill pays homage to Hurley’s work in several spreads: 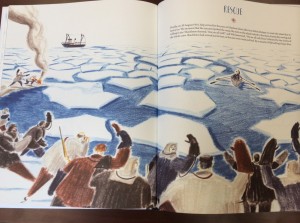 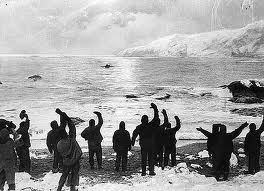 This book is not just an homage to familiar imagery, however: Grill creates his own visual language for the expedition. Some of the most engaging spreads are filled with dozens of tiny sketches that effectively emphasize the attention to detail that seems to have been characteristic of Shackleton’s leadership style and no doubt aided in the improbable survival of his entire crew: 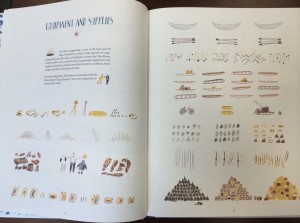 My son and I spent some time pouring over the sketches of equipment and supplies as well as the small drawings of activities the crew engaged in once they were stuck on the ice: 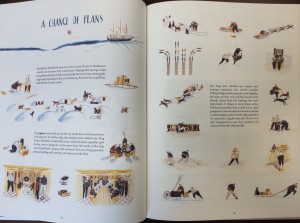 Much of the information Grill wants to present, in fact, is conveyed through these detailed illustrations.

Not all spreads are so full of tiny detail, however. Grill conveys the terrifying scope and scale of the expedition in double-page spreads that emphasize how tiny and insignificant people are in such a vast and forbidding landscape. Take a look at his spread of the Endurance traveling through pack ice (the ship is in the bottom corner far left): 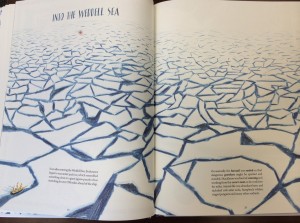 This was an image we flipped back to again and again throughout the story.

Grill’s writing style was not as strong for me. I have some questions about the intended audience for this story. Grill’s writing at the sentence level frequently brought me up short with its unnecessary complexity and lack of clarity. I would have to translate a couple of pages as I read aloud so that my son could comprehend the story, and then we’d come to a page where all the concepts and vocabulary would be appropriate and accessible for his comprehension level. At times, I felt there was too much writing on a page; at other times, not enough.  Grill also seems to assume some familiarity not only with Shackleton’s journey but with the basic outlines of the history of polar expedition. A more thorough and detailed Introduction would have been handy for readers who aren’t familiar with the story.

But clearly, the visuals are the star here, and they are strong enough to overcome any reservations I have about the writing.

One final note: As many other reviewers have noted, there is no back matter with bibliographic citations, author’s notes, or suggestions for further reading. There is a glossary of terms. But the lack of source citation and author’s notes is a serious flaw in an otherwise exceptional nonfiction picture book.