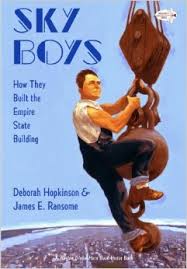 This week, I’m featuring Sky Boys: How They Built the Empire State Building, written by Deborah Hopkinson and illustrated by James E. Ransome. I had seen this book many times at the library but never checked it out because I thought–wrongly, it turns out–that the story of the construction of the Empire State Building wouldn’t be very compelling. Ha! This is a superb story and exemplifies what is so wonderful about the best nonfiction picture books: they turn even subjects you think you don’t care about into stories you’re eager to read and sorry to finish. Hopkinson and Ransome make the story of the Empire State Building’s construction incredibly gripping.

Partly that’s through choices Hopkinson makes in telling the story. She contextualizes the construction of the Empire State Building in its historical moment: the Great Depression, when so many Americans were out of work and feeling hopeless. There is actually something at stake in this building: many jobs for the unemployed as well as symbolic hope. And she creates a character for the reader to identify with: we see the rise of the building through the eyes of a boy whose father is one of New York’s unemployed. At the end of the story, they save money so they can take the elevator ride to the observation deck and view the city from above. Hopkinson crafts masterful sentences, incorporating plenty of memorable facts and details as well as strong imagery.

And Ransome’s paintings are brilliant. Changes in perspective show the reader just how dizzyingly dangerous this work was. He had a treasure trove of old photographs to work from, some of which are reprinted on the end pages. 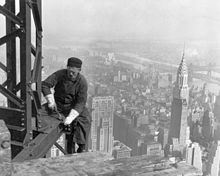 One sign of a successful nonfiction picture book read-aloud in my house is a request from my son to get on the iPad and learn more. We looked at photos of the Empire State Building today–he was especially fascinated by its many different lighting effects. We looked at more photos of its construction and marveled over the skill and strong stomachs of the men who worked so high above the city. And since the Chrysler Building shows up in so many photos of the Empire State Building, we also took a little detour into Art Deco.