On my blog this week:

I had a terrific reading week:

Betty Birney’s The Seven Wonders of Sassafras Springs was a serendipitous discovery at the library this week. I was searching for something else in the B’s and spotted a very plain mustard-colored book printed on thick textured paper. It looked like a book published in the 1940s. My public library has a fairly stringent weeding policy. I couldn’t help pulling this book off the shelves to see how it had survived the rigorous purging of older books. It turns out that it’s not old; it’s only old-fashioned. I opened it up and discovered it was illustrated by Matt Phelan, so of course I had to check it out. And what a delightful story!

Eben McAllister, stuck in a rural farm community that he finds incredibly boring, dreams of travel and adventure. When his father catches him reading a book about the seven wonders of the world, he challenges his son to find seven wonders in their little town. The reward? A train ticket to visit some relatives in Colorado–a real adventure of his own. (The story is set in 1923.) The catch? He only has seven days to find seven wonders. Eben sets off on a journey that takes him all over town and into conversation with many people he’s never talked to before.

This is really a book about the wonder and power of story itself. Setting, characterization, language, and theme are all beautifully crafted.

I finally read Natalie Lloyd’s A Snicker of Magic. I found myself rather meh about it for the first fifty pages or so and really not wanting to be meh given how many readers in my PLN adore this book. But finally something clicked for me, and I ended up loving it just as much as everyone else does. 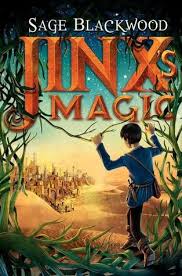 I loved Jinx’s Magic so much. Sage Blackwood is brilliant at writing character and dialogue. I don’t even need a plot (though she’s kind enough to give us a pretty good one): I’d be happy to eavesdrop on her characters chatting away as they go about their daily business.

I took so many notes on Peter H. Johnston’s Opening Minds: Using Language to Change Lives that at times I felt I might as well be copying the whole book word for word. It’s a small book (a little over 100 pages), but packed with so many important ideas. Johnston argues that the way we use words in our classroom has a huge impact on the development of self-worth, values, ethics, and mindset in our students. I think this book actually impacted me so much as the parent of a struggling, insecure learner that I read solely through those parenting lenses. I struggled to set aside all of the insights I was having as a parent to think about how I might use this book in my teaching practice. Or rather, I had so many insights into my son and into the ways I need to change the ways I use language with him that my brain was too busy with that to consider applications to my classroom. But I already know this book is going to go on my shortlist of annual PD rereads, so I will have other opportunities to think about what it means to me as a teacher. I am hoping to write a longer review later in the week.

Neil Gaiman’s Fortunately, the Milk was the one dud for me this week. I listened to this book on audio, and while of course Gaiman does a brilliant job narrating, it was obvious that the success of the story depends upon Skottie Young’s illustrations. This is simply not a story that works at all without the pictures. The premise is wispy thin, and that’s really all there is: there is nothing that you can identify as character development, theme, or setting, and even the use of language, usually a strong point for Gaiman, seemed a bit strained.

I can’t recommend Jacob’s New Dress highly enough. This is a book that explores gender norms in a warm, affectionate, and hopeful way. Jacob loves typical little boy things and he also loves some typical little girl things, like wearing dresses and playing princess. He gets teased by Christopher, and he definitely gets his feelings hurt. When he asks his mother to help him make a dress he can wear to school, she hesitates and there’s a beautiful moment in the text where her hesitation gives Jacob a “can’t-breathe” feeling. Jacob’s parents were especially interesting to me, as they clearly want to support their son but feel conflicted. They are comfortable with him wearing dresses at home; at the same time, their impulse is to discourage him from wearing dresses to school because they know he is likely to be teased and bullied. His mother ultimately helps him make a dress, and his father, while acknowledging that wearing a dress wouldn’t be his own personal choice, agrees that Jacob looks great. The writing by Sarah and Ian Hoffman is sensitive and positive without being heavy-handed, and the illustrations  by Chris Case are very engaging. I read this book to my older son (who will be a sixth-grader), and it led to a rich and interesting conversation about kids who are different, bullies, and why it’s important to be true to yourself.

Up! Tall! and High! by Ethan Long certainly deserves its Geisel Gold. This is going to be a great title to recommend to all my readers who love Mo Willems. 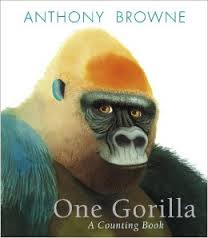 I should have hated Anthony Browne’s One Gorilla. It has two huge strikes against it: (1) it’s a counting book and, except for Mac Barnett’s Count the Monkeys, I LOATHE counting books; and (2) it’s full of gorillas and monkeys, which I find to be rather terrifying animals. But it’s Anthony Browne, so of course I loved it. My son and I poured over the illustrations. 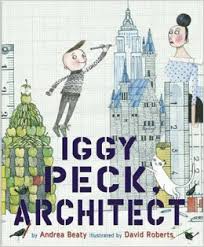 Iggy Peck, Architect, written by Andrea Beaty and illustrated by David Roberts, didn’t quite work for me, though my husband and son loved it. I think the problem, for me, is that I came to it confused about what it was, and my expectations got in the way of my enjoyment. For some reason, I thought this was a more serious look at a child who loved to build things and grew up to become an architect. But it’s not serious at all. It’s actually a whimsical and wacky story. Which normally would work just fine for me because I love whimsy and wackiness. But in this case, I was disappointed. Part of that may have been the writing: I don’t like rhyme, and some of the rhyme felt forced to me. But I did adore Roberts’s illustrations. As an object, this book is practically perfect.

I was very impressed by the writing in Tony Johnston’s My Abuelita and have been looking for more of her books. (Which shouldn’t be hard to find because she’s written over 70 of them!) That Summer is the first one I found at the library, beautifully illustrated by Barry Moser, and boy, is it a tearjerker. It’s narrated by a boy whose younger brother has a terminal illness, and it’s about the last stages of that illness and the brother’s death. Very hard material, very well done.

We continued rereading the Mr. Putter and Tabby series with Mr. Putter & Tabby Feed the Fish, which features a couple of my all-time favorite illustrations of Tabby, who likes the pet fish Mr Putter purchases from the pet store just a little too much. These books are so, so perfect.