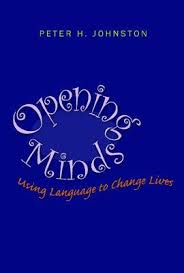 Peter Johnston’s Opening Minds: Using Language to Change Lives is a book every teacher (and, I would argue, every parent) needs to read. Johnston explores how small changes in how we use words in our classrooms can have a profound impact on our students’ self-concept, understanding of themselves as learners, and ethical development. And he really is talking about small changes in the ways we use words: the difference between telling a child “You’re a good boy” and telling him “You found a good way of doing this,” for example.

One is person-oriented praise, while the other is process-oriented feedback. One creates a fixed mindset; the other creates what Johnston calls a “dynamic-learning frame,” or the “growth mindset” familiar to readers of Carol Dweck’s popular Mindset. One causes children to develop “contingent self-worth” and believe “they are only able, good, and worthy when they are successful”; the other helps children to develop “agency,” the belief that they can grow, learn, succeed, and effect change in their environment.

I took pages of notes on the first few chapters of this book because I saw my older son everywhere in it. His experience of the world in his first nine years or so of life, the time before I became his mom, produced a fixed mindset that really worries me.

When he doesn’t do something well the first time (and how many things worth doing do we do well the first time we try?), he believes that he can’t do it at all ever. And because he believes he can’t do it, he doesn’t bother to try. This mindset has a tremendous impact on his life in school. He entered American school as a third-grader who didn’t know English and therefore couldn’t read or write yet. But “yet” isn’t part of his vocabulary. Because other kids could do it and he couldn’t, he decided that he would never be able to do it. And three years later, that is still his belief. Johnston’s words about agency are instructive:

For us to have agency we have to believe that things are changeable, because if they can’t be changed, taking action is futile.

When we don’t believe something can be different, we have no reason to take action. My son has no reason to practice reading, because he doesn’t believe he will ever be able to read. Practicing would be a waste of his time.

Not only that: practicing makes him feel bad, because practice usually entails making mistakes, doing something the wrong or the partial way before you’re able to do it the right or the complete way. Making mistakes is incredibly painful to my son. When he makes a mistake, he thinks he is bad or stupid. His self-concept is tied to his performance–to succeeding at a task. In order to hold onto his tenuous self-concept, failure–an essential part of learning and life–must be avoided at all cost.

Of course this is not how I want my son to go through life. His world is so limited, he is so full of fear and anxiety, and he doesn’t want to take any kind of learning risks.

And school only exacerbates the problem. I think it could easily be argued that the fixed-performance frame is the inevitable consequence of our education system. Johnston acknowledges the dangers of our mania for standardized testing (and it is a mania: my children each took FOUR national standardized tests this school year, and countless additional hours were wasted in “test prep”), but I think performance-based learning goals and outcomes are equally to blame. Johnston notes that performance goals are a terrible idea for fixed mindsets, and that makes sense to me. A performance goal indicates that learning is something that can be accomplished and achieved; even more, it indicates that what’s important about learning is the outcome, the product::

In a dynamic view, the process–how they did things–is the most important. From a fixed view, the process is of little consequence; it is the outcome, the performance, the speed, and the number of errors that draw most attention, because they represent the otherwise hidden amount of ability.

It’s not only my son I think about when I read the early chapters of Opening Minds. I also think of my students, especially the college freshmen in my Comp 1 courses. The fixed-performance frame described by Johnston captures their view of themselves as learners and writers as well.

My students believe that some people are “born writers.” Some people who are decidedly not them. Either you can write or you can’t. They’ve learned from experience–bad grades, poor performances, red marks all over their papers, negative teacher comments–that they can’t. They have no sense of writing as something that doesn’t come out perfectly the first time. They have no sense of writing as something you work at or practice to develop strategic knowledge. They come to my class with a fixed mindset. They don’t believe they can improve as writers. They don’t believe they can write effectively. Much of my work as a writing teacher necessarily focuses on trying to develop the dynamic-learning frames that will help my students be engaged, passionate learners and writers in my course and all their courses.

Johnston’s solution to the problem of a fixed-performance frame will feel familiar to many writing teachers. The key to developing a dynamic-learning frame is to focus on process. Once we begin to use language very intentionally in our classrooms to emphasize process and strategic knowledge, we can begin to effect change.

First, we can emphasize process and strategies over results.

Second, we can offer process-oriented feedback rather than person-oriented praise.

What teachers are really doing when they use this language is helping students think metacognitively. They are positioning students as strategic thinkers and operators who can grow, change, develop, do things differently, learn.

I have to confess that I find all of this fairly easy and natural in my role as a teacher. But I really struggle to be this intentional with my use of language at home with my children. It’s so easy to fall back into the mindless praise of “Good job” and “Good boy” and “I’m so proud of you.”

But it turns out that such mindless praise can have negative consequences for the ways we view ourselves, each other, and the world.

Our individual learning narratives and mindsets influence the ways that we comprehend, communicate, collaborate. We create the world in the ways that we think and believe, in the assumptions we make, in the ways that we speak to each other. Opening Minds would be an incredibly valuable resource for teachers even if it only focused on developing dynamic-learning frames. But Johnston is much more ambitious: the second half of the book tackles nothing less than how to create the kind of society we want to be part of–a just, truly democratic society.

Johnston focuses on ways to promote inquiry, encourage dialogue, and to build social imagination and moral agency. Again, small changes in our language can create big changes in our classrooms.

We can ask open questions, increase our wait time, respond to students’ comments with “perhaps” or “I wonder,” ask students to talk to each other rather than to us.

We can model and teach processes for resolving conflicts with simple questions: “What’s the problem?” and “How can you solve it?”

In the final chapter, Johnston tackles education reform and argues that school should be about doing meaningful work, about solving problems and creating things, not about racing to the top:

Ultimately, we have to generate a more productive vision for society that the one that has been guiding schooling, and we must equip children with what they need to construct that society.

Johnston’s own vision for society is one where a “fair education” enables “every child [to] develop as fully as possible.” His book helps teachers sow the seeds of such change–one question, one observation, one “perhaps” at a time.