Ruth Ayres hosts a weekly celebration on her blog. I appreciate this invitation to find positives at the end of the week.

We’ve had some wild weather in Dakota over the past couple of weeks, including tornadoes and baseball-size hail. My little town had been lucky–reaping the benefits of wild weather patterns (cooler evening temperatures as the storms blew in, lots of rain) without the dangerous consequences suffered by other areas (tornadoes, hail, flash floods). But on Tuesday night, we had a major thunderstorm with hail of various coin sizes. Not big enough to bust windows, thank goodness, but more than big enough to completely trash a garden.

Leftover hail the morning after: 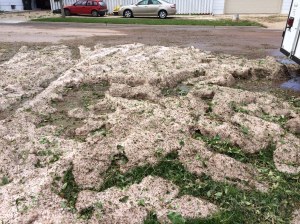 On Wednesday morning, I stood on my porch surveying the wreckage of my garden and feeling rather sick. It looked like a Giant had come tromping through my flowers. After a damaging storm like this, I feel lucky that I don’t depend on my garden for food or livelihood. I don’t grow a single vegetable. My garden is purely for beauty and pleasure.

It is not very beautiful right now. And working in it is not very pleasurable. So much snipping of broken stalks and damaged leaves to be done.

But still, I can celebrate:

1. Thanks to Colorado gardeners, I know what to do to salvage my garden! I spent a few minutes mourning on Wednesday morning, then realized I’d better get busy. I read about a dozen articles and blog posts written by Colorado gardeners–who apparently deal with a lot of summer hail–about how to clean up your garden after a hailstorm. There was much terrific advice, and I knew exactly where to start when I headed out to my garden. I am still working on it, but I am hopeful that nearly all of my plants will recover.

2. Peonies! When I first inspected the damage, I thought there were zero flowers remaining in the garden. But then I found three peonies bent over in the dirt, protected by another plant.

3. Oregano! It was the only thing still standing straight and tall. Not one broken stalk. Not one punctured leaf. That stuff is hardy.

4. Fences! About three dozen new perennials and herbs that I hadn’t yet planted sustained virtually no damage from the storm because they were tucked away on the right side of a tall fence.

5. My new herb garden! I planted the new herb garden yesterday. The new front garden is beginning to take shape. My son came outside last night, surveyed my work, and said, “It looks like that magazine.”

This is the magazine he means: 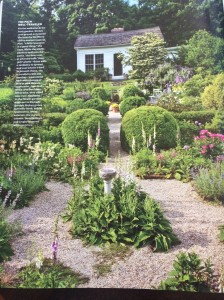 As your eyes are no doubt telling you right now, my yard looks NOTHING like this magazine. But I appreciated his magical thinking. It’s probably never a good idea–and especially not when you live in South Dakota–to take inspiration for a gardening project from Martha Stewart Living magazine.

But my garden can certainly be beautiful in its own way.

And now for a few gratuitous cat photos. 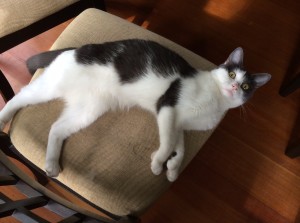 Last week, I wrote about how Abby refuses to share her special Powell’s book box with other cats. But there has been A Development. She hopped into the box with Puck and tried to bully him out, but he ignored her. He’s an 18-pounder and so oblivious that he once crawled into my lap while I was holding my thrashing, shrieking, raging, spitting, nearly-puking-with-a-temper-tantrum eight-year-old and settled right down for a nap. There was barely any lap available because, you know, thrashing, shrieking, raging, spitting, nearly puking eight year old. But Puck was undeterred. He saw a small opening and he took it.

Puck just looked the other way when Abby squeezed herself into the box with him. She slapped him. He closed his eyes. She looked confused. Then bored. Then sleepy.

And now we have this happening: 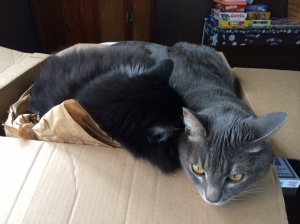