Ruth Ayres hosts a weekly celebration on her blog. I appreciate this invitation to find positives at the end of the week.

It was my birthday yesterday (yep, 4th of July), and a very fine day overall.

1. Birthday cake. My son requested a banana cake for my birthday, so yesterday I whipped up this super simple Classic Hummingbird Cake. It isn’t pretty–sometimes I think I specialize in unsightly baked goods. But it is delicious. 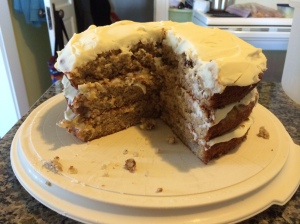 2. Watching the 4th of July Parade with my husband. In the best of circumstances, I am not a parade kind of person. And we live in a town of 3500, so our parade is, in my husband’s words, a “strange simulation of a parade.” But we had a surprisingly good time. Perhaps it was the iced coffee I fortified myself with before it began. Probably it was the good company. I am not quite sure what qualifies as a “float”. Mostly it seems like local businesses paint their names on their cars and drive through town very slowly, tossing disappointing candy (Tootsie Rolls) and waving. There was one tractor (a 1951 John Deere that nearly gave the little boy next to us an apoplexy–he started screaming “Daddy! A John Deere! A John Deere!” WAY before the tractor was anywhere close): 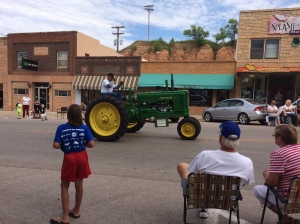 A couple of horses, including this nattily-dressed fellow: 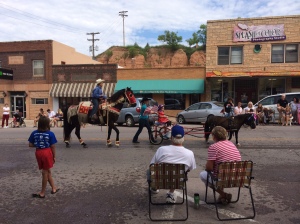 There are a number of floats with kids on them, including the float my son rode with his baseball team: 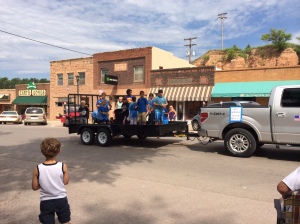 They didn’t throw candy: they shot water guns at the crowd. The kids who were scrambling for candy seemed to enjoy it, and all the adults took a big step back.

I’m sorry you can’t see this picture better because it’s a girl wearing a mammoth head mask to advertise our one really stellar local attraction, the Mammoth Site: 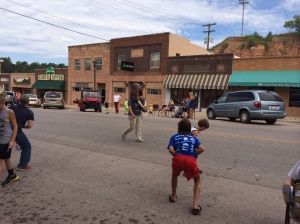 Our town’s three firetrucks bring the parade to a rousing and noisy conclusion:

3. My first Demolition Derby. Our small-town Independence Day celebrations also include a Demolition Derby! We thought this would be just the thing to entertain our son for an hour in the afternoon, and it certainly was. He has been full of nothing but derby talk ever since. As with the parade, we appeared to be the only people watching ironically. I had a hard time not laughing hysterically the entire time because the whole thing was so delightfully absurd, but everyone else seemed to have serious face. There was much yelling, whooping and cheering for the favorite (people actually seemed to have a favorite)–as well as quite a bit of beer, which might explain the yelling, whooping and cheering. I definitely NEVER need to go to a Demolition Derby again, but my son enjoyed it so much that I have a feeling we will be there again next year. 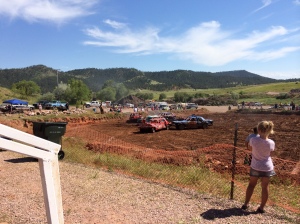 4. Many sweet moments with my son. My son has long allowed me to love him–at least most of the time, but he has been fighting his own feelings of love for many months now. It is terrifying to love again when you have lost so much. But this week, he stopped fighting. For just this week, he stopped fighting. And it was often amazing. This week has been filled with so many small moments of laughter and connection and joy. The work of attachment is so hard and messy, and he has so much grief, so much trauma to process as well. Just because he stopped fighting it for this week doesn’t mean he won’t wake up this morning fighting for all he’s worth. I know we’re not there; we’re not done. But something has been changing for him, just as it has been changing for me.

5. Fireworks. One bonus to being born on the 4th of July is that you get fireworks for your birthday, which makes everything extra festive. It was the first time we took our son to see fireworks, and there was this one little moment when I looked over at my son sitting next to me and I looked up at the sky and everything was perfect.

Eventually I will stop concluding Saturday celebration posts with a photo of cats in boxes, but this is not that week: