I loved Jimmy Gownley’s graphic novel, The Dumbest Idea Ever!, a memoir about how he became a graphic novelist. Gownley has some important things to say in this book about creativity, inspiration, and effort, but it’s also a quick fun read about a kid in middle school and high school trying to manage his life and find time for sports, homework, friends, and comic books. This is a book that will appeal to many readers–a must for every middle school and high school classroom library. 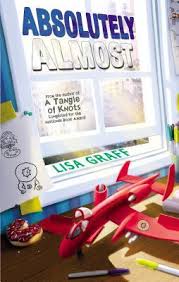 Absolutely Almost is unusual in that it is a literary middle-grade novel featuring an absolutely ordinary kid who’s average in most things and below average in school. Albie’s struggles with school and learning were so poignant to me. It was hard for me to read the scenes with his parents, who put so much pressure on him to achieve in ways that he simply can’t. He works so incredibly hard and improves dramatically on his spelling tests, but because he doesn’t get 100%, his father doesn’t even recognize his progress. This is a book parents need to read, and it’s also a book that teachers need to read and share with their students.

I’ve read a couple of Lisa Graff’s other novels as well and found myself incredibly impressed by the stylistic differences between this book and her other books. She can write so lushly and evocatively, but that wouldn’t be a voice or style suited to Albie’s first-person narration.

The cover of Bunny Days by Tao Nyeu suggests a story full of pastel prettiness with happy bunnies and bears. And each of the three short tales in Bunny Days does end with the assurance, “Everyone is happy.” But this is a bizarre little book. I absolutely loved it, but it’s probably not for everyone.

The hapless bunnies have a series of misadventures that involve household appliances. First, they get muddy and Bear saves the day by throwing them into the washing machine (conveniently located in the field). (He hangs them out on the line to dry. The image of little bunnies clipped to a line with clothespins is both hilarious and mildly disturbing.) Then Mrs Goat accidentally vacuums them up when she’s vacuuming over their burrow. Bear saves the day by slicing open the vacuum bag and then blasting the dusty bunnies with an industrial fan. In story #3, they don’t get dirty, thank goodness, but something even worse happens: they are separated from their tails as they’re playing hide and seek in a hedge that Mr Goat happens to be trimming with large hedge clippers. Once again Bear saves the day by sewing their tails back on. I had to share the spread of the little rabbit peeking between its fingers as Bear stitches its tail back to its bottom: apparently this image has been highly traumatizing for some small children, at least if we are to believe Amazon reviewers.

In a review that’s definitely worthy of the 100 Scope Notes One-Star Review treatment, one Amazon customer notes that her “relatively tough toddler” cried when he saw the bunnies tails being cut off and sewn back on. She concludes, “Don’t buy if you like bunnies….or your children.” Which is my new favorite sentence ever.

I’m Bored, written by Michael Ian Black and illustrated by Debbie Ridpath Ohi, cleverly explores the eternal problem of bored kids (well, eternal except in my house. I am not sure my children know there is a word for the condition of feeling bored. Not that they’re never bored. They just don’t know they can complain about it. Let’s keep it that way.) She encounters a potato who is even more bored than she is, and as she tries to explain to the potato why he shouldn’t be bored playing with her, she discovers that she’s actually not bored at all. And the highly bored potato gets exactly what he deserves in the end.

Buffalo Music, written by Tracey Fern and beautifully illustrated by Lauren Castillo, is the fascinating story of how one Texas pioneer woman helped to re-establish a national bison herd after the animals were nearly hunted to extinction. It’s a fictional story but based on the efforts of a real person, Mary Ann Goodnight, who witnessed the disappearance of the wild herds in her area of Texas, took in orphaned buffalo calves, and built one of the first captive buffalo herds in America. She even sent some of her yearlings to Yellowstone National Park to help re-establish their herd.

This was a special story for us to read: we live a few miles from Custer State Park, which has a large bison herd, and there are also a couple of buffalo ranches on our drive to Rapid City. It still amazes me that I live in a place where you can actually take buffalo sightings for granted!

We enjoyed Rukhsana Khan’s Ruler of the Courtyard, illustrated by R. Gregory Christie. It’s the story of how one young girl allows her terror of chickens to overwhelm her good sense and how she pulls herself together and overcomes her fear. I normally like Christie’s work, but I found the illustrations in this book rather ugly.

Bad Bye, Good Bye is an exquisitely written and illustrated story for the youngest readers about the challenges of leaving home and moving to a new place. Deborah Underwood’s text is so spare and poetic, and Jonathan Bean’s art is brilliant. Every writer who wishes to write in rhyme needs to study Underwood’s writing, because she is one of the few authors who consistently manages to surprise and enlighten with her rhyme–even when using the simplest of rhymes.

Like Loading…
← Sunday Salon: A Round-Up of Online Reading
→ Slice of Life: Teaching to Our Lead Learners