If I think very hard about them, Malcolm Gladwell’s books usually unravel: he has a tendency to support a very large claim with a very tiny anecdote and to leap to conclusions that can’t always be sustained through more careful analysis. And yet I find his writing incredibly compelling and thought-provoking. Listening to them on audio is really the perfect choice for me: I am not an auditory learner, so I can never understand enough by listening to start picking holes in the argument! I thoroughly enjoyed his most recent book, David and Goliath: Underdogs, Misfits, and the Art of Battling Giants. The argument is simple: the underdog often isn’t at as much of a disadvantage as we think he is. Or rather, what looks like a disadvantage may well give him the advantage. Gladwell covers an incredibly wide territory, as always: the Biblical story of the title, the Civil Rights Movement, dyslexia, the grieving parents of murdered children, the conflict in Northern Ireland…. It’s all a bit dizzying, as Gladwell’s books tend to be, and very hard to put down.

Sarah Dessen’s The Moon and More focuses, as her most recent couple of novels have, on that final summer before becoming an adult: the summer after high school graduation and before college. This is interesting territory to mine, and Dessen does it as well as anyone, but I didn’t find The Moon and More particularly compelling. It’s a long novel (nearly 450 pages) with not very much happening. I appreciate that Dessen crafts novels out of the regular drama of everyday life and interactions between people who are more or less getting along, but the characters never came to life for me in this book. I had a hard time even remembering the main character’s name.

At my son’s request, I read the second Timmy Failure novel aloud. I feel like I deserve some sort of special parent read-aloud superhero cape now. I don’t think this is a bad series (and occasionally it’s quite funny), and it makes a great read-alike for fans of Big Nate or Diary of a Wimpy Kid. Much of the humor is over my son’s head, however, and I have to say that I tire of the nasty dispositions of characters like Timmy, Nate, and Greg Heffley. Reading this book made me long for a story with any kind of heart. Why can’t I find some heavily illustrated middle-grade stories that are sweet?? 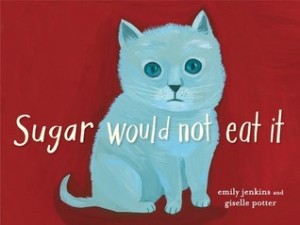 How I love Emily Jenkins! In Sugar Would Not Eat It, she makes fun of all the ways that we try to force children to eat food they don’t like or want to eat, but she does it with a twist that gets us off the hook: the main character, Leo, is trying to get his new kitten to eat a piece of delicious chocolate cake, but no matter how much he begs, pleads, or threatens, “Sugar would not eat it.” Of course kittens shouldn’t eat chocolate cake in the first place, so this reader was rooting for Sugar all along. My son found the whole situation perplexing. “Why doesn’t he buy her some cat food? Why is he so stupid?” And in the end, when Sugar finally finds something more palatable to her tastes, “Duh.” So I would say I enjoyed this one a lot more than he did.

I finally got my hands on one of D.B. Johnson’s lovely picture books based on Henry David Thoreau and now I can’t wait to read the rest of them. Henry Works follows Henry through a morning around town and country as he helps out person after person but gets little credit for it. It didn’t mean anything to my son when Henry delivered a letter to Emerson or planted some wild strawberries in Mrs. Hawthorne’s garden, but I got a little bookworm thrill. When Henry eventually sits down to his real work of writing, he has plenty of material to write about. A quiet, lovely story and a clever way to make Thoreau accessible to children. 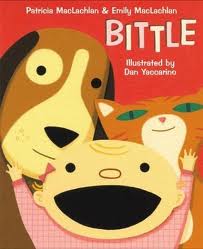 Bittle is Julia the dog’s and Nigel the cat’s name for the new baby who disrupts their quiet predictable lives. Julia especially hates the new baby at first but grows to love her over the course of the story, much to Nigel’s surprise. There is nothing particularly new about Patricia MacLachlan and Emily MacLAchlan’s take on the story of a new baby’s arrival, but this book is quite charming. Pairs nicely with Emily Jenkins’s That New Animal.

Kate and M. Sarah Klise’s Imagine Harry is about Little Rabbit and his imaginary friend, Harry. It’s a sweet and also slightly bittersweet story of Little Rabbit finding real friends and losing his need for Harry. The illustrations are especially charming, and Klise has fun with the empty space that represents the invisible Harry.

I’m on a Mo Willems reread kick right now and made my son listen to Happy Pig Day! for the third or fourth time this week. But really, the Elephant & Piggie books are always good. 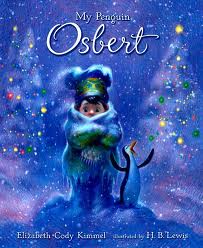 Apparently My Penguin Osbert is a very popular book: you can even buy an Osbert stuffed penguin. Elizabeth Cody Kimmel’s cautionary Christmas tale is quite funny. Joe has been disappointed by Santa in years past so he is very specific in his letter requesting a penguin. Finally he gets exactly what he asks for–only to discover that having a penguin for a pet isn’t quite what he imagined it would be. Santa agrees to a do-over, and Osbert ends up in a much more suitable place.

Like Loading…
← Sunday Salon: A Round-Up of Online Reading 8/24/14
→ Top Ten Tuesday: Top Ten Books I Want to Read But Don’t Own Yet