Visit Unleashing Readers and Teach Mentor Texts to participate in the kidlit version of this weekly meme. 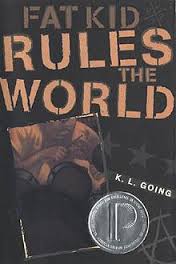 K.L. Going’s Printz Honor book, Fat Kid Rules the World, has been on my YA Shelf of Shame for years. I’ve checked it out from the library at least a dozen times and haven’t gotten it read, but thanks to the magic of audio, this time I made it through! The novel opens as Troy, the likable main character and fat kid of the title, has decided to throw himself in front of a subway train to end it all. Ever since his mother died, he has had a strained relationship with his father and brother, and he has no friends. But salvation shows up in the unlikely form of Curt MacCrae, a kid Troy sort of knows from school. Actually, everybody knows super-cool Curt, who is as famous for being homeless and only occasionally attending school as he is for playing guitar. The two form an unlikely but believable friendship when Curt decides that Troy should be the drummer in his new band–even though Troy hasn’t touched the drums since seventh grade. The novel does have a lot going for it, especially the strong voice of Troy.

Biggest, Strongest, Fastest is an older Steve Jenkins title that profiles fourteen record-holding animals–longest, biggest, smallest, etc. Each spread features a cut-paper collage of the animal, a short paragraph detailing what’s remarkable about it, and a comparison with humans (showing a small figure of a human to scale next to an anaconda, for instance). My son has been talking about the facts he learned in this book for days.

When Agnes Caws, written by Candace Fleming and illustrated by Giselle Potter, is the story of a little girl whose special talent is bird calls. She and her famous ornithologist mother head off to the Himalayan Mountains to search for the elusive pink-headed duck. Agnes calls it quite by accident, but then finds herself in a bit of a bind when the villain, Colonel Pittsnap, steals the bird for his collection–and kidnaps Agnes as well. A book that manages to be both silly and quirky with plenty of opportunity to show off your bird calls as you read aloud.

In Christopher Myers’s H.O.R.S.E., two friends challenge each other to a game of Horse (which Myers describes for readers unfamiliar with it) but they are then so busy dreaming up impossible shots and tall-tale trash-talking about the incredible feats they can accomplish on the court that they never do quite get the game started. Clever and creative.

In Lauren Castillo’s The Troublemaker, a boy gets in trouble when he “borrows” his sister’s stuffed rabbit to send out on an adventure. But it soon becomes clear that he’s not the only troublemaker. A sneaky raccoon has its eye on the boy’s own favorite toy, a stuffed raccoon. This book is pretty much picture book perfection. Destined to become a classic.

I am in the middle of what seems like 500 different books right now and really need to concentrate on FINISHING some things. So that is my goal for this week: start nothing new! Instead, finish!

YA Shelf of Shame Challenge: 6/12 books