The year is winding down, and I will miss my favorite reading challenge when the calendar rolls around to 2015. Kid Lit Frenzy’s Nonfiction Picture Book Challenge has changed my reading life forever, because I am now OBSESSED with nonfiction picture books. 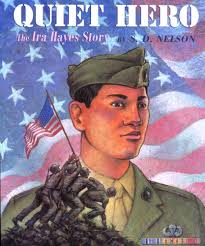 You might think you don’t know who Ira Hayes is, but you do. He’s the soldier on the far left in this photo: 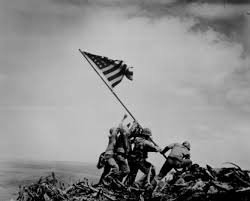 Hayes was born on the Gila River Indian Reservation in Arizona. He was a member of the Pima tribe. Nelson describes Hayes’s childhood and early family life as the oldest of four brothers. As a teenager, Hayes left the reservation to attend a government boarding school in Phoenix. Nelson notes the intense loneliness experienced by Hayes after he left his family but doesn’t fully acknowledge the abuse and cultural alienation that characterized the boarding school system.

After the attack on Pearl Harbor, Hayes decided to join the Marines. Nelson makes an interesting point here:

Many people thought of Indians as fierce fighters, so Ira was allowed to train for combat along with the white soldiers. Other men of color were forced to be cooks or carry supplies.

Hayes seems to have found meaning and purpose in being a soldier. Nelson describes his time in boot camp as “the happiest time in his life.”

Much of the book is devoted to telling the story of Hayes’s experiences fighting in World War II. He “fought in three major battles against the Japanese in the Pacific,” but of course the key experience, thanks to that iconic photograph and war memorial, was the flag-raising mission on Iwo Jima.

Even after he returned home and resumed life as a civilian, Hayes couldn’t escape the shadow of that experience. Everywhere he went, he was celebrated as a hero and toasted with “alcoholic drinks”:

Ira found it hard to adjust to civilian life after the war. His loneliness deepened and turned to despair, and he drank more and more.

Hayes died when he was just 32 years old. Nelson doesn’t say what killed him, so I looked it up: exposure and alcohol poisoning. Nelson doesn’t mention PTSD in the picture book text, but surely that was also part of Hayes’s struggles.

I think Nelson does a remarkable job showing the hardships and struggles of Hayes’s life in a way that is understandable for young readers without being too harsh, upsetting, or scary. The text invites thoughtful and sympathetic discussion and empathy.

Readers who wish to know more about Hayes’s life and experiences will find answers to some of their questions in the detailed “Author’s Note,” which includes 9 photographs. Here, Nelson describes the realities of life on the reservation, at boarding school, and in the military in much more detail.

Leave a Reply to It’s Monday! What Are You Reading? #imwayr 12/15/14 | the dirigible plum Cancel reply