Girlxoxo is hosting today’s link-up for A Month of Favorites. I had a really strong reading year in 2014–very few books that I wanted to put down. Well, except for the Newberys. Those I abandoned left and right, but since I DID put them down, I can’t very well feature them in this post. 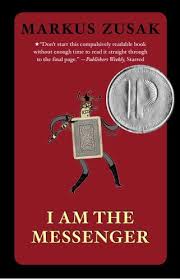 How many times did I start Markus Zusak’s I Am the Messenger and abandon it before I was finally able to stick with it and finish? At least 10. Zusak has been on my YA Shelf of Shame for years (I’m probably the only book nerd in the world who hasn’t read The Book Thief–though that’s not for lack of trying. That’s a book I’ve started and abandoned probably two dozen times. Eventually, eventually, I will make it through.)  I ended up really liking I Am the Messenger. Ed is a loser who almost accidentally acts the hero when he finds himself in the middle of a bank robbery. Afterwards, he begins receiving messages in the mail directing him to people who need some kind of help. The messages are vague, and part of the fun is how Ed figures out what each person might need from him. 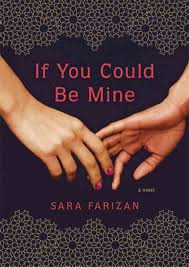 I found Sara Farizan’s debut novel, If You Could Be Mine, intriguing. Set in Iran, it’s about two teenaged girls who are in love with each other but can’t be together because homosexuality is illegal. Sahar is willing to try, but Nasrin is scared and agrees to marry the man her parents have chosen for her. I felt like this was quite enough plot and drama to carry a novel. But Farizan didn’t stop there. Sex reassignment surgery is not illegal in Iran, and so Sahar decides to get a sex change so that she can be with Nasrin. I found it hard to believe that even a besotted teenager would consider that to be an appropriate solution to the problem. It was just too much. Farizan does take the transgender plot seriously and introduce actual transgender characters into the story, so it’s not just Sahar playing at being transgender. Still, the author isn’t really able to do full justice to the complexities and complications of anyone’s gender or sexual identity in this story because there is so much going on. Sahar is reasonably well-developed as a character, but Nasrin remains a cipher (and usually an annoying one) throughout most of the story. For those reasons, I strongly considered abandoning the book. But in the end I decided to finish it, and I’m glad I did. Despite its problems, it’s a novel that’s stuck with me since I read it.

Jonathan Auxier’s The Night Gardener took me three months to read. Mostly it sat on a stack, unread. I had firmly committed to abandonment because I couldn’t renew it any more from the library and clearly I wasn’t going to finish it. I put it in the bag to return to the library. And then I had a last-minute change-of-heart, pulled it back out of the bag, and stayed up late to read through the final third of the book in a rush. I’m not quite the right reader for this kind of book, and while I greatly admired it, I didn’t connect with it emotionally. Still, at the end of the year, I would have to say that this is one of the top two or three most distinguished middle-grade novels I read this year.

A Snicker of Magic is a book I thought I was going to fall in love with on the first page. Instead, it was a very slow starter for me, and I nearly abandoned it several times before I got 60-70 pages in and felt hooked by the story and characters. While I did end up succumbing to its charms and finished it off in an hour of frenzied page-turning and felt all aglow with reading satisfaction for a few days after finishing it, it’s one of my most problematic reads of 2014. The more I think about it, the less it works for me. This kind of material needs the lightest of touches, but Lloyd is often so heavy-handed with her characters, theme, and use of language. 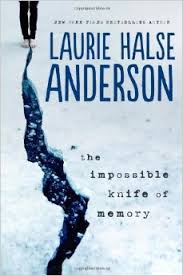 I started The Impossible Knife of Memory in November of 2013 and didn’t finish it until December of 2014. It’s rare for me to come back to a book after such a long lay-off: a year away from a book is basically full and total abandonment forever. I did have to start this one over again from the beginning (which I hate doing!), but I am glad I did. Even though this book has some problems, it’s still one of my favorite YA reads of 2014.