Kid Lit Frenzy hosts the Nonfiction Picture Book Challenge, my favorite reading challenge, every Wednesday. Visit her blog to discover the wonderful nonfiction picture books others are reading and reviewing this week. 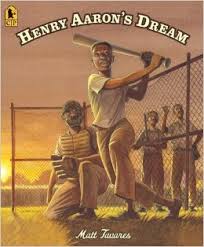 Henry Aaron’s Dream is a gorgeously illustrated oversized picture book biography of major league baseball player Hank Aaron. Although Aaron had a storied, record-breaking career, Tavares chooses to focus on his childhood and, especially, on his years in the minor leagues, when earning a place on a major league team was still not guaranteed even for the most talented African-American players.

The book opens with a stark image of a “Whites Only” sign painted on the baseball field in Mobile, Alabama, where Aaron grew up. Aaron doesn’t even own a baseball or bat, but he still dreams of someday playing major league ball. His father does not encourage this dream; he reminds his son that no African-Americans have ever played major league baseball. Soon, a baseball field for “coloreds” opens in Mobile, and after that, baseball is all Aaron thinks about. In 1947, when Aaron was thirteen years old, Jackie Robinson started for the Brooklyn Dodgers, and Aaron’s dream began to seem just a little bit more plausible.

Still, he had obstacles to overcome. Tavares focuses on the constant racism and discrimination Aaron experienced everywhere he went. Tavares doesn’t pull any punches here: this is not always an easy story to read. But then it shouldn’t be. The image of Aaron, who had just been voted MVP of the game, sitting in the kitchen with two of his black teammates while his white teammates celebrated in the restaurant proper is one I won’t forget.

The fulfillment of Aaron’s dream is good stuff. Aaron finally gets a chance to play in a major league game when a starter and a reserve player are both injured. He makes the most of his opportunity and hits a home run in his first game. He would even go on to play against Jackie Robinson himself.

Tavares writes in a free verse style that makes for sharp, focused text. I read the book aloud to my son and there was much to interest us both in the illustrations and the information presented.