My son and I have embarked on another Rick Riordan series. The Lost Hero introduces three new heroes who will (in later books in the series) join Percy Jackson to save the world once again. Sadly, none of the three is very compelling, which is partly the fault of the plot (one of them has amnesia, which means we learn nothing about him until the very end of the book) and partly the fault of poor character development and middling writing. I had a lot of issues with gender stereotypes in this book. Riordan is obsessed with the female characters’ pretty quotient: every female character’s beauty is described at length–and repeatedly. Piper is beautiful. I GET IT ALREADY. I wish she had something more to do than be pretty, use her charmspeak (a gift from her goddess mother, Aphrodite), and pine after Jason. The pacing of the story is fairly slow throughout, then there’s a giant plot dump right at the end to set things up for Book 2, which my son immediately wanted to start reading. (So he would give this book a rave review, no doubt.) Thankfully, Book 2, so far, is actually much better. Perhaps that’s because the story starts with Percy Jackson, who has also lost his memory but–unlike Jason in Book 1–not his personality.

I really like photographer Brandon Stanton’s Humans of New York blog and his photography book of the same name. In Little Humans, he collects some of the wonderful photos he’s taken of children in New York and creates a picture book celebrating children. The “little humans” featured in the book are New York children Stanton has spotted and photographed on the street. There’s nothing fancy about Stanton’s approach: these are kids taking a minute out of their day to stand and pose for the camera before continuing on their way. There’s a snapshot quality to Stanton’s work that’s very appealing. He has a wonderful eye for the telling detail. The book features full-page, full-color images of some of Stanton’s best portraits of kids. One thing I loved about this book is how diverse it is: we see kids of many colors from many different races and ethnicities. There’s nothing wrong with the text, which is a competent if not very memorable paean to childhood, but I missed the quirky details Stanton typically shares in brief interviews with his subjects and, ultimately, I felt like the photos were strong enough to stand on their own. The text became a distraction. The book is slightly longer than the typical picture book (it’s 40 pages), and I wish it had been 100 pages because I could have looked at many more photos–as could my son. It’s a rare picture book that sustains his attention these days, but he looked at this book 3 or 4 times, pausing at his favorite images and pointing out details I had missed. 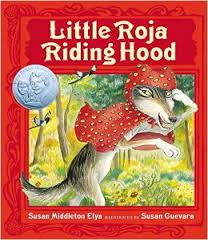 Little Roja Riding Hood takes the familiar fairy tale and gives it a Spanish-language twist. Spanish words are incorporated into the text, which retells the fairy tale through rhyming couplets. (For a rhyming text, it’s not too bad. But I still hate rhyme.) Susan Guevara’s illustrations are the real star here, as she adds considerably to the interest, meaning, and humor of the story through her images.

Stephanie Roth Sisson’s Star Stuff: Carl Sagan and the Mysteries of the Cosmos is a story about the power of wonder and curiosity. Sisson follows Sagan from boyhood, when he was curious about the solar system and loved imagining what it would be like to travel to outer space, to his adulthood as a famous scientist who worked on various NASA projects. It’s written in simple text that even the youngest readers will be able to understand and engagingly illustrated.

Zero has some self-esteem issues. When she looks at herself, she sees the empty space in the middle and thinks she’s not worth anything. She compares herself unfavorably to the other numbers. I loved the moment when Zero realizes that she’s not empty inside–she’s just open. As in One, Otoshi’s minimalist illustrations powerfully convey the message.

Like Loading…
← Links I Loved Last Week: A Round-Up of Online Reading 3/1/15
→ Top 10 All-Time Favorites from the Last Three Years