Grown-ups may be obsolete, but grown-up reading isn’t!

I don’t have many reading resolutions for 2015, but one I do have is to read more books for grown-ups. As much as I love children’s and young adult literature, it’s hard to escape the feeling that I’m working or parenting when I’m reading those books. Reading books for grown-ups is one way I decided to carve out some reading just for me. Here’s what I’ve been reading over the first few months of 2015.

Sarah Ruhl, 100 Essays I Don’t Have Time to Write

I loved this book of 100 very brief essays so much, although I don’t entirely understand why I found it so charming. Ruhl is a well-known playwright, and most of these witty, erudite, thought-provoking, frequently profound essays share insights or burning questions about how theater works. The book is divided into four parts: On Writing Plays, On Acting in Plays, On People Who Watch Plays, and On Making Plays with Other People. I enjoy the theater but rarely go and would have said before reading this book that I have little interest in how it works.

So it isn’t the subject matter that I found so compelling about this collection.

Except that it was.

Ruhl’s insights about theater apply to any kind of creative or artistic undertaking, and her insights into what it means to be a mother who thinks and works and struggles to create are so fresh and surprising, and her connections between the two (theater and parenting) are often brilliant:

both parenting and theater involve an embrace of impermanence, and both are embodied art forms.

I have thought so much about this idea of parenting as an embodied art form. I want to write about this.

This book is the perfect essay collection for mothers who don’t have time to read essays, too. Most of them are very, very short. A witty one on minimalism is just one sentence long. The longest, at seven pages, examines her time studying playwrighting under Paula Vogel in an attempt to answer the question of whether playwriting can be taught.

I found this book to be perfect bedtime reading. No matter how late it was and how tired I was, I could read one or two, feel like I was having some brilliant thoughts, and then fall asleep. 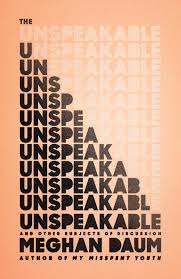 Meghan Daum, The Unspeakable: And Other Subjects of Discussion

The best personal essays are intensely personal, specific, individual. Yet there is always a move somewhere in the piece to some more general reflection, an epiphany that is relevant for all humans. Daum’s personal essays explicitly resist this. She writes about the kinds of situations that generally produce epiphanies about what it means to be human—her mother’s death, her volunteer work as a court-appointed advocate for foster children, her own near-death experience in a coma.

But there is no big-picture payoff for Daum: “I am no wiser or more evolved than I was before. There is no epiphany or revelation or aha moment or big click. There is no redemption. There is no great lesson learned. There is only the unknowable and the unspeakable. There is only the unlikely if ever-present possibility that life is just a string of stories inside a coma. And in this story, I am not a better person. I am the same person. This is a story with a happy ending. Or at least something close enough.”

Daum resists the notion that we become better people through narrative, but I’m not sure I really buy it. We read to be transformed; we read to learn how to live.

No one ever becomes a better person in Daum’s writing—least of all herself. Her power as a writer comes from the unflinching gaze she levels at herself. She can be brutal in describing her own shortcomings, though she often seems oblivious to her two greatest flaws: arrogance and narcissism.

Daum makes the mistake that most of us make—assuming that other people are just like her. She struggles to be kind or compassionate or generous unless she has selfish reasons for it. And she assumes that others struggle just as much. A passage from one of the best pieces, “Diary of a Coma,” is telling. In it, she describes hearing from friends and acquaintances—“even some you wouldn’t expect it from”—that they’re praying for her:

They say they’re praying for me but chances are they’re really praying for themselves. They’re praying that whatever is happening to me never happens to them or anyone they share a bed with or tuck into bed at night. Which is exactly what I’d be praying for in their situation.

Not all of the pieces are serious. There’s a more lighthearted essay I enjoyed called “On Not Being a Foodie” and another lighthearted one that I didn’t care for on dogs.

There is one very serious misstep, “Honorary Dyke.” I assumed that Daum was being ironic in this essay and piling up offensive stereotypes about lesbians in order to mock…. something. But she never made the ironic shift I was expecting, and I was left feeling very uncomfortable and perplexed about her meaning and purpose.

Cary Elwes, As You Wish

In this memoir, Cary Elwes shares his memories of filming The Princess Bride and also traces the film’s incredibly successful afterlife. If you’re a big fan of The Princess Bride, you may enjoy this memoir. There are plenty of behind-the-scenes stories about the making of the film. I listened to it on audio, and it was delightful to hear Elwes read it. There are also guest appearances by many of the actors in the film who share their memories.

Unfortunately, the content is really, really thin. Mostly we hear—at length and from many of the actors and filmmakers associated with the film—how wonderful and brilliant everyone is. Unless Elwes or one of the other actors is talking about Robin Wright, in which case we mostly get to hear how beautiful she is—and how surprising it is that she’s also funny since she’s, you know, pretty. Seriously. The dudes come right out and say this in the book. Sigh.

The Storied Life of A.J. Fikry is a very bookish sort of story, so it ought to be just my kind of book. It’s got a lot of things I like in books: bookstores, islands, curmudgeonly characters, precocious children, book clubs. But I found it to be a frustrating read. There was something very engaging about the voice and writing. But the farther along I got, the more melodramatic and schmaltzy it became. I nearly stopped reading when an unbelievably precocious two-year-old baby is left in the bookstore, discovered by A.J., and adopted by him. Naturally he turns his entire life around overnight to be a decent father to Maya. Naturally the social worker thinks this is just fine. After all, Maya is already calling him dad after spending the weekend with him, so clearly these two shouldn’t be separated. Never mind the incredibly convoluted paperwork and training involved in becoming a foster or adoptive parent. And naturally, Maya shows no signs of developmental trauma as she grows up. She’s just fine after being abandoned by her suicidal mother. If the brain cancer plot turn hadn’t happened so close to the end, I definitely would have stopped reading there. Because really. Brain cancer? We’ve already had two deadly car accidents and one suicide. But it was very close to the end, so I powered on. But I am mystified by this book’s popularity.

I also struggled with the pacing of this novel. Every time I got settled into one time frame, the chapter would change and some random number of years would have passed and it would be on to the next set of melodramatic events. “Only connect,” Zevin has her main character remind us, borrowing E.M. Forster’s famous line, and she makes sure everything in this novel connects. Coincidences pile on, everything is connected to everything else, and the whole novel is tied up with a neat bow at the end. I would have liked it much better if some of the mysteries had been left, well, mysterious.

5 thoughts on “Books for Grown-ups: Reviews of Recent Reading”