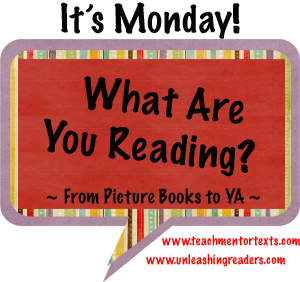 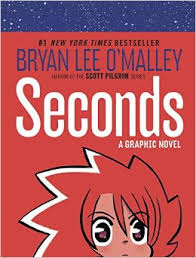 Seconds came highly recommended by one of my favorite people, Kelsey Empfield, and she was right: I loved this graphic novel. It’s about a chef named Katie who is transitioning out of her first restaurant, Seconds, and into her new restaurant, Katie’s. As the name of the new restaurant indicates, Katie’s is all about its chef—she’s the owner and the chef. Unfortunately, the renovation of the cool building she’s bought isn’t going well, and the project is both behind schedule and over budget. Her life is further complicated when her ex shows up at Seconds and reminds her of the uncomfortable and possibly avoidable ending of their relationship. In an effort to make herself feel better, she hooks up with the new chef of Seconds, and while they’re canoodling in the back, one of the waitresses get burned in a kitchen accident. And then things get truly weird: after Katie gets back from taking Hazel to the hospital, she finds a little notebook and a mushroom in the room she rents above Seconds–along with instructions for undoing a mistake. Revision #1? Hazel doesn’t get burned. Result? Katie becomes obsessed with undoing each day’s mistakes, and compiles revision upon revision until she isn’t even sure who she is anymore. There’s an interesting cast of characters, including Lis, the house spirit who leaves the notebook and mushroom for Katie, plenty of plot, and a thoughtful treatment of the theme of revision. As for audience, this is an adult title, though less explicit than most adult graphic novels I read. It’s an excellent adult crossover title for older YA. 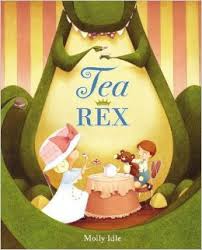 Tea Rex. I have no idea how I missed Molly Idle’s Rex titles before this. Probably because my library doesn’t have them and even though it sometimes seems like I buy all the books, I really don’t. I’ve seen Sea Rex in many recent #imwayr posts, and I was thrilled when I saw it on display at my tiny local independent bookstore. I settled down to read it in the store. And I felt so deflated at the end. I just didn’t get it. The story was boring and the illustrations lacked energy energy, though objectively I see their appeal. Then I spotted Tea Rex and decided to try one more Rex book. Thankfully, Tea Rex is a book I can fully get behind. This time, I thought the story really worked—quite clever and entertaining—and that oddly flat quality I always see in Idle’s style was a charming counterpoint to the chaos of this tea party. 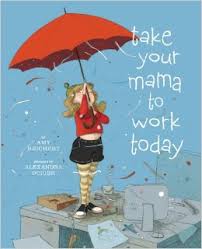 Take Your Mama to Work Today. A random grab from the picture book bins at the library, this Amy Reichert title was one of my favorites of the week. Some unforeseen circumstances result in Mama needing to take her daughter to work. After spending the day in the office, the daughter has much advice to share with the reader about what to do at the office. This might be a book that adults find more amusing than children, who presumably have little experience with offices. There is a lot of ironic humor in the advice and in the juxtaposition of words and illustrations. Nice mentor text to show effective use of second person. 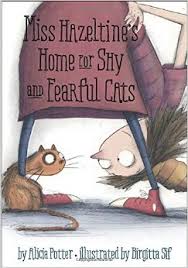 Miss Hazeltine’s Home for Shy and Fearful Cats. I loved this one, but then I’m a sucker for a book about a crazy cat lady since I am one myself (and I’ve got the six cats to prove it). Miss Hazeltine opens her home to emotionally needy cats and tries to teach them brave kitty basics. But Crumb just can’t overcome his fear–that is, until Miss Hazeltine has an accident and Crumb is the only one who can save the day. The illustrations by Birgitta Sif are brilliant. If she and Sophie Blackall and Giselle Potter and maybe Dan Santat could just illustrate every picture book, I’d be so happy. 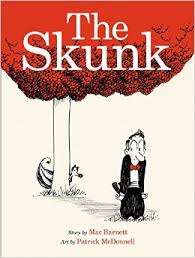 The Skunk. Another clever and thought-provoking offering from Mac Barnett with quirky illustrations by Patrick McDonnell. I’m looking forward to sharing this one with my students in the fall. 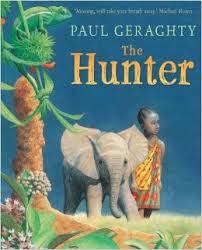 The Hunter. I picked this one up because it’s set in Africa, and Paul Geraghty’s illustrations are gorgeous. It’s a bit of a tough story but worth the read. A little girl gets lost when she’s out collecting honey with her grandfather. She likes to play a pretending game where she’s a big game hunter–until she comes across a mother elephant who has been slaughtered by a poacher. Gerarghty handles this scene with great sensitivity, but it’s still hard to see the dead elephant mama. When I realized there was going to be a dead mother and an orphaned baby in this book, I tried to abandon mid-read. I mean, hello trauma triggers in a week that was already full of plenty of trauma drama! But my son wanted to keep reading, so we did. Some fantasy elements take over at this point in the story: the little girl and the baby elephant set off together to find the rest of the elephant herd. She reunites the baby elephant with its herd; her mother finds her (score one for moms!); in the end, she decides she never wants to be a hunter.