Ruth Ayres hosts a weekly celebration on her blog. I appreciate this invitation to reflect on the positives of my week.

I have many fine and necessary qualities as a parent, but fun isn’t one of them. I have to strive for fun. Strive to the point where I’m not fun anymore. Partly it’s a mom thing, but partly it’s a me thing.

Confession: I hate the 4th of July. It’s my birthday, and it’s nice that everyone always has the day off and there are parades and fireworks in my honor, but the whole day is so damned loud. Maybe there are places in the world where Americans aren’t going wild setting off firecrackers in their backyards, but I’ve never lived in one of those places. I love a sanctioned fireworks display, safely controlled presumably by people who know what they’re doing. It’s pretty, it’s over in twenty minutes, and we can all get on with our lives. 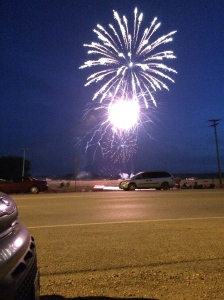 But that’s not what happens in people’s backyards. The fireworks go on and on and on.  It just seems so inconsiderate. What about the infants and small children who need to sleep? What about the dogs? What about the elderly? What about the military vets with PTSD? What about the people who have to get up at six a.m. tomorrow and go to work? I am totally that person who finds out what time fireworks are supposed to stop and starts calling the police on my neighbors as the numbers turn on the clock. (This year, it’s legal until 1 a.m.!)

And then there’s the fire fear. My mother did a wonderful job teaching me to be afraid of matches. And lighters. And sparklers.

I never, ever in a million years imagined that I would be one of those people setting off fireworks.

My son has been running again this week, and there is nothing–NOTHING–more crazy-making to me. It’s silly to be so bothered by it when half the time he’s actually hidden himself somewhere in view of the house so that he can monitor how often I go out looking for him. But for whatever reason, it’s the one behavior that really pushes my buttons. We’d done everything we could think of to keep him home today. Video games, cupcakes for breakfast, visits from grandparents, movies, but he was getting antsy. I staved it off a little longer by predicting it. Reverse psychology always works like a charm–for awhile.

And then my husband had a brainstorm: fireworks. I was skeptical, but then he hooked me: “It will make us seem like a fun family.”

Parenting trauma also means that even super fun parents struggle to feel like a fun family. So when my husband promises to bring the fun, I always say yes. Even if I have serious doubts. Fireworks? Really?

I thought my son wouldn’t go for it. What we’ve mostly heard today is “No.” But I underestimated the teenaged boy’s appetite for explosions.

And so we headed out to the fireworks outlet, which was the most hopping place in town, and we stocked up.

Then we came home and watched some more tv and then went outside to set off firecrackers. And it was…. fun. It was also loud and obnoxious and terrifying and stinky. But there was a very real fun factor. Of course, the most fun part for me was watching my son’s face light up with joy as he blew stuff up. Boys. We took a break to go to the town fireworks display, then my son asked if he could blow some more stuff up. Yes!

“Don’t you feel good saying yes to me?” he asked.

Today, I celebrate throwing caution to the wind and embracing a new motto: if you can’t beat ’em, join ’em. Because sometimes all those people know what they’re talking about.