Visit Teach Mentor Texts and Unleashing Readers to participate in this weekly meme. 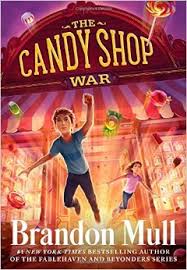 Is Brandon Mull’s The Candy Shop War really worse than any of the other mediocre-to-bad middle-grade series I’ve read aloud to my son? Probably not. But it is the latest, and I think it’s suffering the unfortunate fate of being my straw-that-breaks-the-camel’s-back book. I need a long break from mediocre middle-grade series! This book has a great deal of action, but somehow, I still found it so boring. I think my son did too: he fell asleep within a few pages every single night–which also meant that it took us WEEKS to finish it. There is no character development, no themes, and a lot of poorly constructed sentences to wade through. Mull’s books get rave reviews on Amazon and among the tween readers I know, but I’m hesitant to try Fablehaven or Five Kingdoms after reading this book. 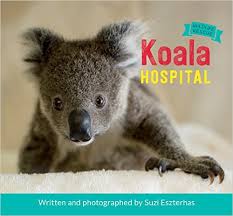 Writer-photographer Suzi Eszterhas’s Koala Hospital is an absolute must-read for everyone. I mean, look at that cover! Who could resist that face?! I was resisting pretty well until I saw the book in person at NCTE and took a peek inside. So many more wonderful photos of ADORABLE koalas inside, plus so much interesting information. Eszterhas shares the work of doctors and volunteers at Australia’s Koala Hospital, which rescues and rehabilitates injured koalas and also strongly advocates for habitat preservation. Overall, an inspiring look at wildlife rescue and conservation. 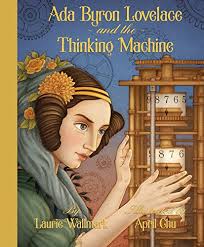 Laurie Wallmark’s Ada Byron Lovelace and the Thinking Machine, beautifully illustrated by April Chu, introduces young readers to the life and work of Lovelace, who developed the world’s first computer program after meeting Charles Babbage, creator of the world’s first computer. Babbage’s machine was never made, so Lovelace’s program was purely conceptual–but when computer scientists ran the program, it did work (after the correction of a minor error). Lovelace came by her love of science and math honestly: her mother was famously learned and hired special tutors for her daughter. Wallmark focuses on Lovelace’s early interest in invention (she tried to create wings that would fly), her friendship with Babbage, and her theoretical work on computers. Transitions between page turns can be a bit rough, and I got lost a couple of times because I wasn’t sure when events were happening (there’s a strange lack of dates, ages, and chronological markers in this book), but it’s a strong introduction to an interesting and important thinker (and Chu’s illustrations are really pretty). 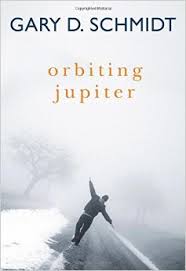 I loved how spare Gary Schmidt’s new novel, Orbiting Jupiter, is. It’s a read-it-in-one-sitting kind of book. The style perfectly suits the subject matter and the setting–rural Maine in winter. I stopped to admire so many sentences and paragraphs. I won’t soon be forgetting the story. And yet….. even though I admired many elements of this book, it didn’t entirely work for me. I have spent a lot of time this week thinking about this book and my reaction to it. Later plot events seemed too coincidental and overwrought. I was frustrated by the ending–not because it packed an emotional wallop for me, as it seems to for many readers, but because it seemed so unlikely that it strained suspension of disbelief and took me right out of the novel. My ultimate feeling is that Schmidt sacrifices believable characters and story for thematic significance: theme most definitely trumps everything else in this story. That’s a very literary approach to take–and a daring one, especially in a middle-grade novel (though the ending, for me, moves this firmly into YA). It’s clear that this book is working for many readers, and I was sad not to love it. 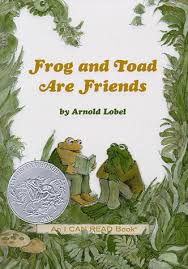 I revisited a very old friend this week, Frog and Toad Are Friends, after hearing Phillip Stead talk about it in his session with Erin Stead and Yasmeen Ismail at NCTE. This book was such a staple of my childhood, so often read and reread, that whole sentences came back to me as I was reading it this week. And there’s really nothing to say about it, except that it is so, so good. Lobel won a Caldecott Honor for the illustrations, but the book could easily have also won a Newbery for writing. Of course now I want to reread all of the Frog and Toad books, so I anticipate a library trip soon.

Like Loading…
← Links I Loved Last Week: A Round-Up of Online Reading 11/29/15
→ My Reading Year: Slumps, Epiphanies, and Maybe a Little Voracity #AMonthofFaves