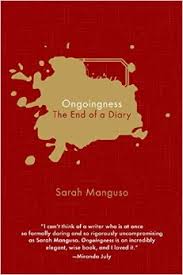 I bought Sarah Manguso’s Ongoingness: The End of a Diary earlier in the year as I was flailing around trying to find something I’d love as much as Sarah Ruhl’s 100 Essays I Don’t Have Time to Write. Ongoingness was not that book. Which is why it took me the rest of the year to finish it, even though it’s only 100 pages and some of those pages contain one sentence.  I found myself alternately intrigued, frustrated, engaged, exasperated. It’s a book that ought to be right in my wheelhouse: it’s a collection of meditations about writing, keeping a diary, and becoming a mother, three topics I think about a lot. There is wisdom in this book, but it often feels like it’s trying too hard. Maybe I was just frustrated because I wanted to love this book and didn’t. Maybe I was frustrated because I was trying to read it as prose and probably should have been reading it as poetry. Unlike Ruhl’s book, Manguso’s kept me at a distance.

How did it take me so long to open Sidewalk Flowers, which has been sitting on my shelf since April? Visually, one of the strongest picture books I read in 2015. And a really lovely message about wonder, being alive to the world around you, being fully present in the moment, and the power of small gestures of kindness. 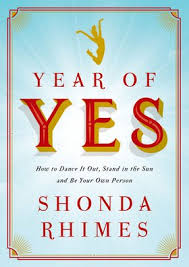 If you don’t know who Shonda Rhimes is, you must not watch TV on Thursday nights, because Shonda, as Shonda never stops reminding us in Year of Yes, owns Thursday night. Year of Yes is Shonda’s memoir of the year she spent saying yes to all of the things she was afraid of (giving speeches, granting interviews, attending star-studded events, playing more with her kids, losing weight, etc.), and it’s mostly a chatty, lively delight, though I will say that a little Shonda goes a long way. She is intense. But there’s a lot of good stuff here about being real with ourselves, facing our fears, and finding happiness, sometimes in unexpected places and ways, conveyed in a breezy style with lots of humor. 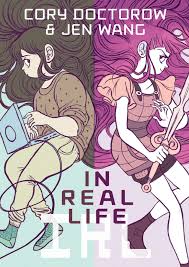 I reread Cory Doctorow and Jen Wang’s In Real Life, a young adult graphic novel about a gamer girl and global economics, for a project I’m working on, and now I’m thinking a lot about the power of the reread. In Real Life fell flat for me the first time I read it. It was a solid meh. I only gave it three stars because I loved Jen Wang’s artwork and I appreciated what Doctorow was trying to do, but I really didn’t think the book worked. On a second read, though, I thought it worked beautifully. found so much to appreciate and enjoy about the story and the characters. What changed? If I had read the book years ago, I could perhaps understand having such a different response, but I read it for the first time last spring. Less than eight months later, a reread shows me an entirely different book. How can I be so different as a reader? And does this mean I should reread every book I find meh? I hope not!

Everything Leads to You by Nina Lacour was supposed to be my first read in 2015. I dutifully started the novel on January 1 last year, then got off track and abandoned it for the year. Instead, it was my first read of 2016, and what a wonderful read it is! As Lacour notes in the Acknowledgements, it’s “a novel about two girls in love”–but it’s also much more than that. It’s about all kinds of relationships–romantic relationships, yes, but also deep friendships and new friendships and parent-child relationships and siblings and our relationship to work. The work part of this book was my favorite part. Emi is a production design intern in Hollywood, and she’s so passionate about set design. This is a great book for romantics and for movie buffs and for anyone looking for a sweet, hopeful story.