Top Ten Tuesday is a bookish meme hosted by The Broke and Bookish. Today’s topic is a Freebie. I’m sharing my top 10 favorites when I was a tween. By the time I was 13, I had stopped reading young adult fiction, but I read it voraciously in the years from 10-13. Based on my reading life, I probably shouldn’t have grown up to be a normal person, and I certainly shouldn’t have grown up to be an English major, but there you go. These were the years of developing an appetite for reading, though clearly not for developing any taste as a reader! 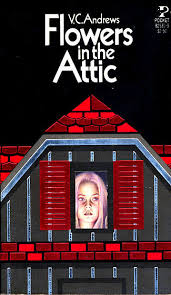 I have been tempted to reread Flowers in the Attic as an adult–just to see what it’s like. But thankfully, I was spared because Lizzie Skurnick did it instead in a hysterical piece called He Ain’t Sexy, He’s My Brother. Read those quotes and cringe, because this is bad, bad writing, people. But I bet I read this book 20 times as a tween.

I read seemingly a million of the Sweet Dreams and Silhouette romances as a teen (how I wish I still had all my copies!), but Secret Identity was definitely my favorite. It’s about a girl who is forced to spend the summer on her parents’ ranch while her parents fly off to Europe. She meets the cute boy next door, who tells her he’s a student. They fall teenishly in love. But wait! He isn’t a student! HE IS SECRETLY A ROCK STAR! So awesome. I just KNEW this was going to happen to me someday.

Gordon Korman has been publishing books since he was 14 years old! I’ve never read his very first novel, written as a seventh-grade assignment (hey, my son fills out Word Searches for his seventh-grade assignments! I’m trying to imagine the 7th-grade teacher who has her students writing novels instead), but I was obsessed with three of his novels throughout the mid-80s. Don’t Care High was the first one I ever read, and unlike most of the books on this list, I think it’s probably still a good read. A couple of years ago, I gave myself a special treat of picking up copies of my three favorite Kormans (for like a penny each on Amazon), and some day, I’m going to reread them.

Elizabeth is the goody-goody twin; Jessica is fast–and kind of mean. It’s the Sweet Valley High soap opera! This series went on for twenty years and an astonishing 152 books! I stopped reading somewhere around book 25.

Richard Peck’s Are You in the House Alone? was singlehandedly responsible for my decision to stop babysitting. It was too terrifying! I don’t think I entirely understood what was going on in this story, but I knew it was very disturbing and wrong.

Sylvia Smith-Smith, maybe more than any other book I read as a teen, was a good predictor of my later reading taste. Sylvia is quirky, a bit of an oddball, and very funny. I will never reread a Sweet Valley High book, but I’d love to get my hands on a copy of Sylvia Smith-Smith.

I’m pretty sure if my mom knew how totally obsessed I was with books about summer camp, she would have signed me up to go to one. Since I didn’t get to go to camp, Hail Hail Camp Timberwood and There’s a Bat in Bunk Five were the next best thing. I think I had every word of these two classics by Ellen Conford and Paula Danziger memorized.

Do you know what happens Up in Seth’s Room? Sexy times, that’s what! Again, pretty sure that most of the sexual content of this story was over my head at the time I was reading it. It didn’t hurt that I had a huge crush on a boy named Seth at the time….

I read Gone with the Wind the summer I turned thirteen. Twice, in fact. I avoided the woozifying book hangover that threatened on the final page by flipping back to page 1 and starting all over again.