The Worst Class Trip Ever didn’t work for me. In its favor, there is plenty of action and I do think the book would have some appeal for reluctant readers. But I struggled with the lack of character development and the ludicrous plot. Spoiler alert (but really, it doesn’t matter): Some kids from Miami on a class field trip to Washington D.C. foil a plot to assassinate the President by gliding in a kite over the White House fence and using a laser jammer to divert the White House missiles. Actually, I think I found that more plausible than the fact that one of their classmates is kidnapped by two men they believe are terrorists and they don’t bother telling any adults. Nope, they save him themselves through a convenient use of the Find My iPhone app. More troubling than the silly plot was that all too often, Barry’s attempts at humor and character development trade on cultural stereotypes. Not recommended. 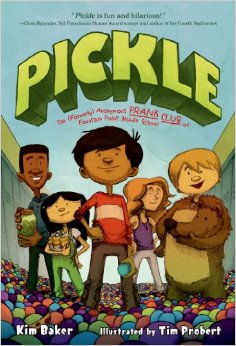 Pickle: The (Formerly) Anonymous Prank Club of Fountain Point Middle School gets everything right that Worst Class Trip Ever gets wrong. The characters are well-rounded individuals, and they do grow and change over the course of the book. The writing is truly humorous, and there is a distinct voice. The plot is creative. There is also an impressive diversity in the characters, and Baker doesn’t need to exploit stereotypes in an attempt to add diversity. Sixth-grader Ben decides to form an invitation-only prank club with a few of his classmates—only they can’t, of course, announce that they’re a prank club. Ben comes up with the perfect alias: a club of Pickle Makers. He’s pretty sure no one except the initiated will want to join the club. After all, what middle school kid wants to make pickles? As it turns out, they have to make pickles as well as pull pranks, and their attempts at both are full of humor. Excellent read-aloud as well.

I loved the handful of poems in Winter Hours, a collection of Mary Oliver’s prose and poetry, but the prose wasn’t nearly as engaging to me. Her particular brand of wisdom distilled into the intensity of a poem really appeals to me, but over the course of a longer piece of prose, I had a hard time paying attention and appreciating her insights. Probably a book I just wasn’t in the right mood for at the time.

Winter Hours led me to Why I Wake Early, a strong collection of poems full of observations about the natural world that Oliver uses to illuminate the human condition. Oliver has an astonishing eye: she sees and notices what I think no one before has seen or noticed. What I most appreciate in her poems is the wonder and delight she greets the world with. Reading her poetry reminds me of all that is amazing and profound and mysterious in the world. There is a rich philosophy and spirituality here and something both comforting and challenging in these poems.

What’s ahead: my son and I are reading Al Capone Does My Shirts. It’s a reread for me and a first as a read-aloud, and it’s absolutely wonderful. I’m hoping to get to a big pile of picture books I’ve got checked out of the library. And I just started Lily King’s novel for grown-ups, Euphoria, which is so far excellent.