The week in slices:

All I have to say after reading Edward Hallowell’s The Childhood Roots of Adult Happiness: Five Steps to Help Kids Create and Sustain Lifelong Joy is that my son should grow up to be the happiest adult in the world. This might be a good first read for parents who are not self-aware, haven’t done any reading on parenting, and mostly do traditional parenting (or who overschedule or don’t spend enough time with their kids). But I found that it reiterated too much of what I already know and wasn’t compellingly written (far too many personal family anecdotes). 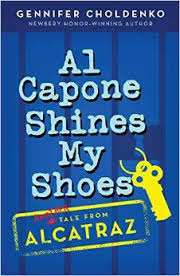 My son and I continued our read-aloud of Gennifer Choldenko’s trilogy about Moose Flanagan and his family. Al Capone Shines My Shoes is a fun, plot-twisty read-aloud, though it is not as character-driven or tightly written as the first book. One frustration I sometimes have with middle grade is when the whole plot would collapse if a single kid decided to tell an adult what was going on–and the situation in this book is definitely one in which at least one kid would decide an adult needed to be brought in. Even my son was wondering why the kids weren’t telling their parents what was going on! But that’s a minor quibble. We thoroughly enjoyed this book and immediately started Book 3.

How Do Dinosaurs Eat Their Food? is a clever way to teach manners to the younger set. The first half of the book shows some very badly behaved dinosaurs breaking every table rule you can think of. The second half assures us that dinosaurs would actually eat very politely. I love the diverse families Mark Teague features in his illustrations, and the dinosaurs themselves are simply glorious. 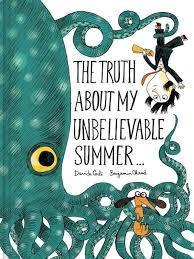 The Truth About My Unbelievable Summer is the third fantastical adventure Davide Cali and Benjamin Chaud have collaborated on (my favorite is still I Didn’t Do My Homework Because…), and once again, Chaud’s illustrations steal the show.  So much to look at and enjoy in the pictures. The plot doesn’t hang together quite as cohesively in this one, but I’m not sure it really matters.

Ethan Long’s Fright Club is a cute Halloween-themed picture book about a bunny and several other sweet animals who want to join the monsters’ Fright Club but get denied because they simply aren’t scary enough. In the end, they prove that butterflies and bunnies can be just as scary as mummies and ghosts. I enjoyed Long’s illustrations, but found the story a bit meh.

Mike Twohy’s Outfoxed is quite funny: it’s the story of a fox who catches what he thinks is a chicken for his chicken dinner, only when he pulls the bird out of his pocket, he discovers he grabbed a duck. Clever Duck wants to avoid the stew pot and manages to convince Fox that’s he not a duck at all but rather a dog. There are many amusing scenes where Duck slobbers on Fox’s face and chews his clothes.