My son and I read Coe Booth’s Kinda Like Brothers, which feels like it’s been on my TBR list forever, but since it was only published in 2014, I know it hasn’t literally been forever. In any case, this is a really strong middle-grade title-excellent read-aloud, plenty of drama and interest, a bit of humor, and lots to think and talk about. I especially admired how Booth wrote the adult characters–present, involved, good people, far from perfect. There are A LOT of trauma triggers in this story, but all handled so sensitively. My son and I had some great discussions as we were reading. 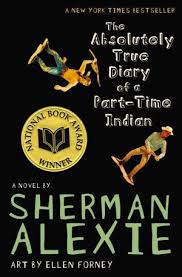 And then he chose The Absolutely True Diary of a Part-Time Indian for our next read. I haven’t read this book in years, though I often require it in my YA lit course, so I was pleased to get a re-read AND to read it aloud, which I’ve never done before. Not surprisingly, it’s a very good read-aloud. Diary is still one of my favorite YA novels of all time–an important book that can change a life, written with humor and heart and so much voice. This is the first true YA novel that I have read aloud to my son–and I can’t think of a better title to start that reading journey with him. (Though for the record, I am so not ready to give up middle-grade with him yet.) I still think maybe a bit too much happens to Arnold in this book, but I don’t think that’s unrealistic as a portrayal of reservation life. When I attended a talk by Alexie at NCTE a couple of years ago, he mentioned that he was working on another YA novel about Rowdy, to which I can only say Yes Please and Hurry up! 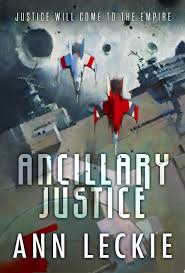 I got out of my comfort zone this week and read a book of sci-fi. Fantasy, I’m cool with. Sci-fi? Not so much. And Ancillary Justice was really disorienting for at least the first third. Chapters alternate between two different plots taking place at two different time periods, though the two stories eventually merge. But more disorienting than the narrative organization is the complexity of the main character, Breq, also known as Justice of Toren and One Esk numbers One through, well, I’m not sure. Breq is a singular entity now, confined to just this one human-looking body, but in her two thousand plus years of existence, she has also been a multiple entity–a troop carrier spaceship and its many ancillaries, artificial intelligences that look human but have many body modifications, including internal armor, and a kind of hive brain that’s also capable of reading and knowing the brains and bodies of the humans she/they serve.

The plot is actually rather simple: Breq is on a mission of her own devising to find and kill the Lord of the Radch, the ruler of a vast space empire. This would seem to be an impossible task for many reasons, and the focus of the plot is largely in discovering why Breq wants to kill Anaander Mianaai. It’s all most page-turney and compelling. Leckie’s got quite a lot on her mind here, especially issues of gender and imperialism, so there’s much to think about–but also much to enjoy in the delightfully rich characters and thorough world-building. I imagine I’ll rush through the rest of the trilogy in the next week or two.

I read Laurie Ann Thompson’s excellent nonfiction picture book, Emmanuel’s Dream, aloud to my Children’s Lit class this week. I loved it just as much the second time as I did the first. And I also wish Sean Qualls illustrated every book–I really love his work.

Elsie’s War: A Story of Courage in Nazi Germany is an accessible book appropriate for fairly young readers. It’s the story of one woman who had the courage to try to help people who were persecuted by the Nazis. For me, it didn’t quite work as a picture book. It’s illustrated with photographs, which sometimes help the reader understand the story and sometimes don’t work as well. The text doesn’t give quite enough detail for the reader to understand the story’s context, and it doesn’t really invite more curiosity and wonder.

I really liked The Book Itch, Vaunda Michaux Nelson’s nonfiction picture book about the National Memorial African Bookstore in Harlem, and, especially, about Lewis Michaux, its charismatic and visionary owner. The story is told from the perspective of Michaux’s young son, which is a brilliant choice. Consistent use of that point of view helps Nelson convey complex political and philosophical ideas clearly and compellingly, and of course there is also plenty of book love. R. Gregory Christie is an inspired choice for illustrator. A must read.