It was a slow week on the blog, though I did manage to catch up on quite a bit of blog reading and shared the usual Sunday links post. 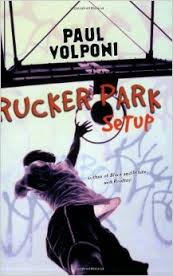 Rucker Park Setup…. great book for the reluctant reader who’s a basketball fan. It’s fast-paced and action-packed. Two best friends have made it to the championship game at Rucker Park’s famous summer basketball tournament, but one of them is stabbed and killed right before the championship begins and the other one thinks it’s all his fault. The novel incorporates heavy flashback into the action of the championship game as readers discover the sequence of events that led up to the stabbing as well as the identity of the killer, who happens to be present at the game.

I read this one aloud to my son (he chose it based on the cover), and I was glad to get to the end. Character development is almost nonexistent, and while the ethical issues at the heart of the novel are interesting, it’s difficult to care very much about the characters’ choices since they are mostly cardboard cut-outs. The extensive use of flashback to multiple past time periods can be confusing. (I counted five flashbacks to three different time periods plus the current time frame of the championship game in just one and a half pages at one point.) But I do think this is a great choice for reluctant readers.

I’ve read several books about Pale Male, and I think Janet Schulman’s Pale Male: Citizen Hawk of New York, illustrated by Meilo So, may be my favorite. Pale Male’s story is here in thorough detail, including parts of the story I had forgotten (the removal of the nest after George W. Bush’s administration relaxed the Migratory Birds Treaty, for instance) and the subsequent loud protests outside Pale Male’s posh Fifth Avenue digs. Meilo So’s illustrations are lovely, and this is definitely a book that will send readers straight to the Internet for photos and videos about Pale Male. Do note that this is a very text-heavy picture book written at a level that will be challenging for its audience.

I was so busy admiring Lauren Castillo’s illustrations in Twenty Yawns that the story barely registered–though I will admit I yawned quite a bit reading it. So now I’ll have to get it from the library to reread because I don’t remember the story at all. But those illustrations are so lovely!

I chose I Am Jazz as the last read-aloud in my Children’s Literature course this semester. I really like this picture book: it defines and explains transgender identity in a way that is accessible to a very young audience, and it promotes acceptance, understanding, and celebration of the ways that we are alike and the ways that we are different. I’m excited about Jazz’s book for teens that’s coming out next month. (And now I want to watch the reality TV show too.)

Mustache Baby is just as silly as you’d imagine. I wish I’d had a group of kids to share this one with. Loved the ending too.