Gordon Korman’s Swindle is an engaging middle-grade heist novel. It’s the first in a series of (I think) seven. I’m having a hard time imagining how this particular group of kids is going to find themselves in seven different heisty plots, but Korman is never short on plot, so I will have faith that it’s possible. Of course the technicalities of Swindle are absurd, but then that’s usually the case in a heist story. Plausibility isn’t necessarily the goal. There’s plenty of action, and while it’s a bit short on character development, it’s a quick, satisfying read. My son wanted to begin the second book, Zoobreak, immediately.

When Spring Comes, written by Kevin Henkes and illustrated by Laura Dronzek, is just as lovely as you’d imagine. The text by Henkes is simple and poetic, and Dronzek’s illustrations—though not personally to my taste—effectively convey that simplicity of language through image. Not, I think, a book that would interest older readers very much, but a good choice for young ones and picture book lovers.

David Shannon’s Bugs In My Hair tackles a topic I never expected to see given picture book treatment: lice! And it’s terrific. Funny, informative, and just a little bit squirm-inducing.The lice manage to be both cute and gross at the same time.

Frances Dean Who Loved to Dance and Dance has a message that I never tire of reading in picture books: get over feeling self-conscious and embrace who you are. Frances Dean loves to dance—but only when nobody is watching. She meets a girl who loves to sing and isn’t afraid to belt it out in public, which helps Frances Dean develop her own confidence. Of course Birgitta Sif’s illustrations are marvelous. I love how the cat is in all the pictures. This is one I think I’ll start reading in my Creative Mind class. 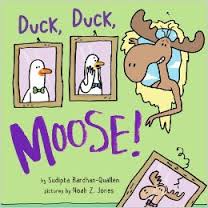 Duck, Duck, Moose! uses just two words and some capitalization and punctuation to tell an engaging story about a moose who manages to create chaos wherever he goes. The illustrations tell much of the story. Very clever and funny.

Little Pink Pup is a true story (illustrated by photographs, which I wish were used more often in nonfiction picture books) of a runt pig who can’t complete with his brothers and sisters and is brought into the house to try to survive. Tink, the dachshund, has recently had a litter of puppies, and she decides to adopt the new little pink pup too. She’s as enthusiastic about him as she is about her biological pups (she was also fostering pups from another dachshund at the same time!) The text is straightforward and simple; the photos are the real star. I didn’t read this one aloud to my son, but he asked what it was about and looked at some of the pictures. My favorite moment was definitely when he pointed to a picture of Tink and Pink and said, “That’s us! You’re my Tink!” Tink is apparently a minor Internet star, so I’m off to look at pictures and watch videos of her with some of her other rescues (who include a goat and a cat, among many puppies!).