Some day I’m going to get my blogging mojo back, but not this week.

I finished Ann Leckie’s tremendous Ancillary trilogy this week. So very good. Each book has its own set of big ideas to contend with. Books 2 and 3 tackle oppressed populations, citizen rights, and the humanity of AIs. Incredibly thought-provoking and utterly absorbing. I’ve had a book hangover all week and can’t find anything to read that I like nearly so well.

My son wanted to continue with Gordon Korman’s Swindle series. We finished Book #2, Zoobreak, where our trusty eleven-year-olds take on a corrupt and evil zookeeper and break forty animals out of and into zoos. The plot is ludicrous, and plot is really all there is (the books are competently written, but they’re not about character development or theme), yet somehow it works. I’ll be glad when we can read something with a little more substance (we are currently in the middle of Book #3), but these make for pleasant enough read-alouds. 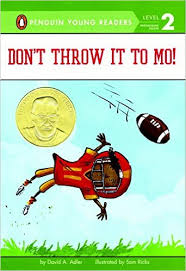 Don’t Throw It to M0! was this year’s surprise Geisel winner. It was a very strong year for early readers, and while this was a perfectly nice story, for me it lacked the humor, heart, and re-rereadability that the Geisels usually have. The story is quite predictable (so often the Geisels have some kind of delightful twist), and the characters are not particularly compelling. I did appreciate that the main character is African-American, and I always like a sports story, so there’s that. 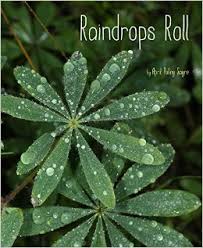 Raindrops Roll is a nonfiction picture book for very young readers that features great photographs and punchy poetic language telling the story of what happens in a garden when it rains. For me, Sayre’s language is the real star: such energy, imagery, and just plain fun in her word choices. Terrific mentor text and read-aloud. I even liked the rhyme! 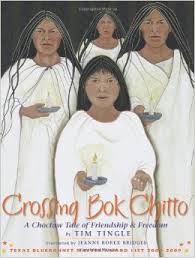 Crossing Bok Chitto, written by Tim Tingle and beautifully illustrated by Jeanne Rorex Bridges, is an interesting (though a bit long) story of cooperation and friendship between a Choctaw girl and an African-American slave in nineteenth-century Mississippi. There was a magical realism element that bothered me: wouldn’t it have been nice if escaping slaves could have magically become invisible as they walked past the plantation owners who were hunting them? Overall, though, well-told and intriguing.

My Story, My Dance: Robert Battle’s Journey to Alvin Ailey is a nonfiction picture book about African-American dancer, Robert Battle. It didn’t quite work for me (overlong, unfocused text and often uninspiring illustrations–I so wish the whole book had been illustrated in the style of the end papers), but it would still be a good book for many collections.

I loved John Coy’s Game Changer: John McLendon and the Secret Game. It’s the story of an illegal basketball game played in 1944 between the all-white Duke University Medical School basketball team and the North Carolina College of Negroes team. Coach McLendon believed that basketball could overcome prejudice, and he decided to test it out in a secret game between the two teams. And that’s exactly what happened: the white players gained great respect for the African-American team and their fast style of play. (The first game was an absolute beat down, 88-44, North Carolina College of Negroes.) For their second game, the two teams integrated and played shirts on skins, then decided to hang out afterwards and talk basketball. It’s an inspiring story, accessibly told, with unusual and striking illustrations by Randy DuBurke.