Jairo Buitrago’s Two White Rabbits is a sensitive, artful look at a little girl’s experience trying to cross borders as a migrant. The exquisite illustrations by Rafael Yockteng help connect some of the dots that are intentionally missing in the narrative. A title that manages to be both timely and timeless. 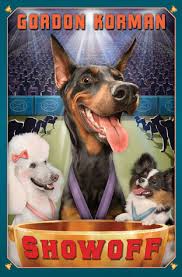 The most absurd title in the series so far, Showoff features the transformation of the semi-insane guard dog, Luthor, into a magnificent show dog. I did enjoy hamming it up with a gruff Russian accent for the semi-insane world-famous dog handler who plays an instrumental role in Luthor’s transformation. My son has asked me several times this week to speak to him in Dmitri’s voice, and I am happy to oblige. I have been feeling a little irritable about having to read all of these books aloud–but then I saw a review on Amazon by a mom who has read them all AT LEAST THREE TIMES aloud to her son, and that helped me gain perspective. Korman’s writing is always fine, but the plots… the plots are killing me. 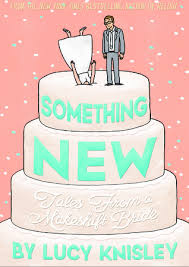 Lucy Knisley’s new graphic novel memoir, Something New, blends the story of her own engagement and wedding planning with a pointed but often humorous analysis and critique of wedding culture.  I liked this book very much–though perhaps not quite so much as her other graphic novel memoirs. Something New was a bit longer than it needed to be; there are some repetitions and retreading over the same insights that could have been cut or tightened. And the wedding industry itself is a fairly easy targe: most readers will not be surprised by Knisley’s critiques, because we’ve all thought those same things. Still, a thoroughly enjoyable book and a must-read for Knisley fans.

I couldn’t put Melissa Fay Greene’s The Underdogs: Children, Dogs, and the Power of Unconditional Love down: I read it in just a day, which is almost unheard of for me. I had some issues with the editing; there are long tangents about dog breeding, breed histories, and dog heroics that–for me–weren’t always germane to the book’s purpose. But the stories of the children and their dogs that are at the core of the book are so incredibly absorbing, I could forgive it almost anything.

The Underdogs is about a service dog organization that trains dogs for children with special needs, including autism, fetal alcohol syndrome, physical disabilities, and attachment disorder. The dogs are hand-selected for each family and trained to provide the specific support that family needs. Families with “elopers” (generally kids diagnosed with autism who run) get tracking dogs. Families with children who rage (from autism or complex developmental trauma) get dogs who have been trained to place their heads on a child’s lap during a “tantrum” to provide pressure and distraction. The dogs can sense the chemical change in the child leading up to the rage and sometimes intervene to keep it from happening in the first place. Children whose worlds have been made small by physical disability suddenly find their worlds growing much larger as they go outside with their dogs and find themselves approached by other kids and adults who want to know more about their service dog. I was especially interested in the ways that these dogs can benefit children who have experienced complex developmental trauma and attachment disorder. Parents who have never had a full night of sleep can suddenly sleep through the night because their child can now sleep, thanks to the presence of the dog. Heartwarming, uplifting, and just plain fascinating, this book sent me all over the Internet learning more about the 4 Paws service dog organization that’s profiled here as well as following other little fascinating threads (prison programs where prisoners get to keep cats!).