There was a wee bit of action on the blog, a post about my newest hobby–art journaling:

Just two left in Korman’s Swindle series! (Well, until a new one comes out in September. SIGH.) Hideout is the most absurd yet in the series. Evil Swindle (the kids’ nickname for S. Wendell Palomino, the villain from Book 1 who cheats the kids out of a valuable baseball card) has come to claim his old guard dog, Luthor. The kids must spirit the gigantic Doberman off to their various summer camps to keep him from falling into Swindle’s hands until they can prove that Savannah is Luthor’s rightful owner. Luthor is a 150 pound Doberman. Let us imagine, shall we?, the kids stowing a dog of this size in a duffel bag. And then let us imagine the duffel bag being stowed in the luggage compartment of a bus. Does the bag not writhe and move? Is there no barking to alert anyone that there is a dog inside? How can Luthor breathe? How can his long, skinny Doberman legs not break? It’s summer. Does the luggage compartment not soar to 120 degrees?

The plot repeats itself three times, as Luthor moves from one camp to another and must be hidden in ever-more-elaborate and cruel ways. Truly, the book deserves a citation–the bad kind–from an animal rights organization. Not only is there the duffel bag business, but Luthor is leashed to a pipe and left alone for hours in an abandoned cabin, locked in an attic, and left unsupervised in a fire watch tower–not to mention fed hamburgers and hot dogs (well, when the kids do remember to feed him), banned from appropriate potty breaks and walks, and even shot by a tranquilizer gun. Poor sweetie, as Savannah would say. 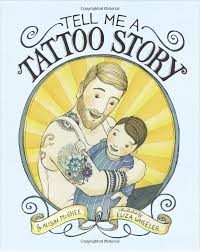 I’m really surprised not to have seen a picture book about this topic before, given how many people have tattoos (including me) and how many interesting stories are connected to tattoos. Perhaps it’s because those interesting stories tend to focus on love and loss and grown-up adventures, not necessarily the most obvious topics and themes for the younger set. But Allison McGhee makes it work in Tell Me a Tattoo Story. There is also a tender parent-child love story at the heart of this book. Eliza Wheeler’s illustrations are delicate and charming and really develop the text.

I think I liked the art in There Is a Tribe of Kids best of all of Lane Smith’s books–and that’s saying something. He manages to have a distinctive style that nonetheless seems to change and grow from book to book. The story is a bit of a trifle: we follow a boy on his adventures through interesting collective nouns. I feel like the collection noun thing has been overdone, but there were some fresh examples here.

The Bear and the Piano is picture book perfection. There is a fine story with a lesson (actually several lessons) that never feels heavy-handed or unearned, and the illustrations are so lovely. I am not sure this book worked its way into my heart quite as much as it has for so many readers, but it’s still one I want to own and can’t wait to share.

I have to confess: I just don’t get Molly Idle’s Flora books. They seem so repetitve and slow, and while they’re pretty enough to look at, the paper cut-outs and folds just don’t engage me in the way I feel like they’re supposed to. But I have to say: I fell hard for Flora and the Peacocks. I loved the edgy tone that developed as the two peacocks became jealous and irritated with each other and poor Flora was stuck in the middle. And that final fold-out is a showstopper. I gasped aloud in the bookstore when I got to it. So perhaps I’m a fan after all. 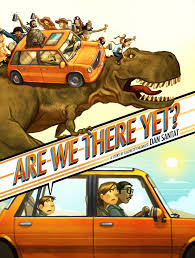 Dan Santat is brilliant. That’s really all I can say. The challenges of a long road trip are explored to great whimsical effect in Are We There Yet? There should be nothing new to say about kids getting bored on a road trip, but clever use of metaphor, perception, and perspective make this story fresh, innovative, and so much fun. Loved the Beekle sighting too!

Amy Dychman and Zachariah O’Hora have done it again with Horrible Bear!, a smart and very funny story about mistakes, bad tempers, and the power of heartfelt apologies. So very good. 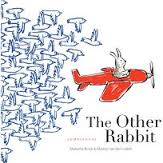 The Other Rabbit is the kind of picture book that won’t appeal to all readers. It’s weird in the way that so many European picture books are. There’s something a little unresolved, a little philosophical, a little “huh?” about it. One rabbit is looking for “the other rabbit” and in the meantime runs into many animals as well as their “other” counterparts in its quest. Lots of random things happen–hey, the rabbit is flying in a plane! Hey, the plane has mechanical issues and crash lands on an island! Hey, there’s a king driving a car! Hey, there’s another king! None of it really makes sense, but it doesn’t really need to either. The simple illustrations are appealing, and who could possibly protest when there’s a dragon to save the day? 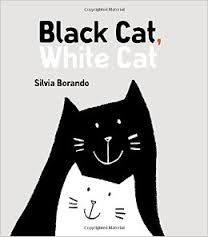 I love the use of black and white illustrations in this story of a Black Cat who only goes out during the day and a White Cat who only goes out at night. They each decide to take a risk and explore during the hours they normally stay inside. They meet, become friends, and show each other the special pleasures of day and night. The story manages to be childlike and poetic, and the unexpected ending made me giggle.

A boy and his elephant decide to play hide and seek. The set-up shown on the cover is depicted again and again through the story: the elephant makes his best effort but is woefully obvious in his hiding spot. Luckily, he has the perfect hide-and-seek partner, because the boy can’t ever manage to spot him, no matter how visible he is. The two have a wonderful time, and the illustrations are so delightful. Somehow the repetition of their game never gets stale or tired, and the ending is quite clever and amusing. 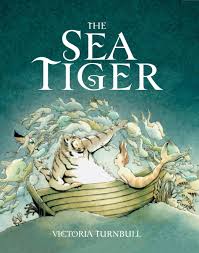 Victoria Turnbull’s The Sea Tiger is a visual extravaganza. Merboy Oscar only has one friend in the whole world–Sea Tiger. But luckily, Sea Tiger is a very fine and worthy friend. The two have many visually stunning adventures underwater. The Sea Tiger clearly thinks that Oscar needs more than one friend, though, and sets out to help him. It’s all quite sweet and charming, though the story really doesn’t matter that much. The whole purpose of this book is the wonderful pictures.

Like Loading…
← Top Ten Tuesday: 10 Reasons Why I Love Art Journaling
→ What Did You Do on Your Summer Vacation?: Slice of Life