I blame my lack of blogging on Ruby, our new puppy. Were we completely bonkers to increase our already chaotic zoo of seven pets to eight–especially when Pet #8 is a six-month old totally untrained dog? Absolutely! But look at that face! This photo was taken by her foster mom, and it’s still one of my favorites:

Those eyes! Those ears! Those spots! That NOSE!

But–FOCUS!–this is a post about books, not adorably speckled and spotted pit mixes. 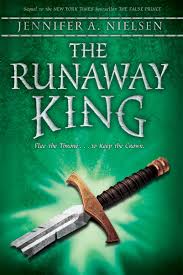 In The Runaway King, Jaron runs away to join the pirates. Of course, there’s an ulterior motive to protect his kingdom, but in the meantime, there’s plenty of disguise and misdirection and a host of new characters. I found the plot a bit creaky in this one–at the end, I didn’t feel like enough had changed nor had the characters grown enough to entirely justify a whole book. But it was still an enjoyable romp.

My son manages to do a good impression much of the time of a kid who doesn’t care about books or reading, but then we have moments like this one when Kate DiCamillo’s latest entry in the Tales from Deckawoo Drive series arrived at our house. He came inside, fresh from doing some sort of teenish thing, spotted the book on the counter, and squealed in delight. “It’s a new pig book! We have to read it tonight!” And so we took a break from Jennifer Nielsen’s series to read all about Baby Lincoln’s “necessary journey.” I’m not sure how engaging this book would be if you weren’t already a fan of the series, but since I imagine all of its readers will have read the Mercy Watson books as well as the other Tales from Deckawoo Drive, it’s safe to say it’s a delight. I very much enjoy doing voices for both Baby Lincoln and her crabby sister Eugenia. And thank goodness for hot buttered toast! 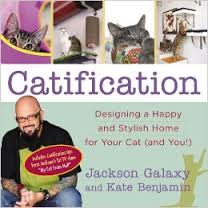 With two pit bulls (well, technically one pit bull and one pit mix because Ruby is definitely not all pit), I now feel like a crazy dog lady, but we all know that really, I’m a crazy cat lady. I’ve recently developed a small obsession with Jackson Galaxy’s show My Cat From Hell (great show, terrible show title). In several episodes, he has solved issues in multiple-cat homes with catification, a process of adding enrichment and movement options in your cat’s home environment. Think cat trees, only nicer and creating “superhighways” along the walls, ceilings, incorporating furniture, shelves, climbing poles, etc. Catification is a smart and attractive home design book that provides many examples of beautiful and seamless design solutions for adding higher ground for cats to explore and use for escape. We’ve now got plans to catify our living and dining rooms, and I’m confident that it will look cool with nary a carpeted cat tree in sight. 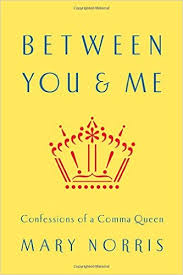 Mary Norris’s Between You & Me: Confessions of a Comma Queen is a book that doesn’t quite know what it’s about. Part memoir of the 30+years she spent working in the copy department at The New Yorker, part style manual, part research article into the stickiest grammar questions, and part opinion piece, it’s the kind of book that somehow adds up to less than the sum of its parts. It should have been delightful, but mostly it seemed self-indulgent and unfocused. It’s gotten very positive reviews, however, so clearly I’m in the minority. 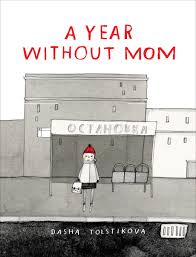 I wish there were more books like Dasha Tolstikova’s A Year Without Mom. I’m going to call it an illustrated memoir, but it’s basically a longform picture book for a middle-grade audience. Dasha recounts the year she spent living with her grandparents in Russia while her mother attended graduate school in the U.S. Not a lot happens in terms of plot or even character development, but because it’s about that year between childhood and young adulthood when so much is psychologically fraught, it’s still very compelling. 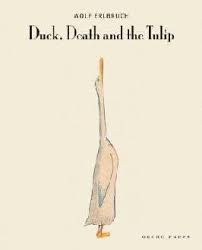 Ah, those wacky Europeans! Who else could write and publish a picture book like Duck, Death and the Tulip? It’s about the unlikely almost friendship that develops between Death, depicted with a skull for a face, and an elderly Duck, who has begun to have “a feeling” that the end may be coming. It is inevitable that the duck will die, and this is a book that faces that inevitability without flinching. It’s spare, elegant, tender, not exactly comforting and yet not exactly un-comforting either. 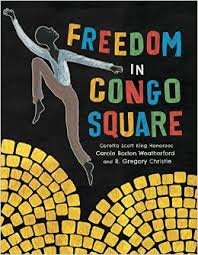 Another winner from Carole Boston Weatherford, Freedom in Congo Square describes a week in the lives of slaves living near New Orleans, a week that would end with a public gathering in Congo Square. Very few cities allowed slaves to gather in large groups, but New Orleans did, and for a half day on Sundays, Congo Square became a market, dance hall, concert space. R. Gregory Christie’s illustrations bring so much movement and energy to the text, and Weatherford’s poetic lines are strong. There is also ample back matter that provides a historical context and more information.