Back to school means back to reading picture books at the breakfast table! I discovered that my son is really too distracted before school to be able to focus on our current read-aloud (Jennifer Nielsen’s The Mark of the Thief; so far, a meh for me, though my son seems to be liking it), so I decided to see if he would tolerate picture books–and he did! Which means I need to make a run to the library to check out all the books I’ve read and loved over the past months but haven’t shared with him since he’s been “off” picture books. Luckily, I still had a few sitting on my shelves that we hadn’t read yet. 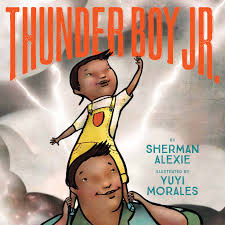 I had such high hopes for Thunder Boy Jr. One of my favorite authors and one of my favorite illustrators team up? How could it be anything less than awesome!? And there is such a need for contemporary children’s stories about Native Americans. My personal library does include many books by and about Native Americans, but nearly all of them are historical or retellings of oral tradition stories. I was primed to love this book.

But. While there were things I liked about it (especially the relationship between father and son and Alexie’s humor), overall, it made me uncomfortable. I kept thinking about the ways this book could be misused in the classroom (“everyone, choose your own Native name and explain why you chose it”–and sure enough, I’ve seen such assignments online). I think there is simply too much for non-Native readers to misinterpret and misunderstand about Native cultures and traditions of naming. It is too easy to read this book as a non-Native reader and fall into stereotypical thinking about Native Americans, and there is nothing within the book to keep that from happening. Such a high-profile book was an opportunity to provide some much-needed specificity and context to contemporary Native American life as depicted in children’s literature, and I’m disappointed that no one involved in the publishing of this book thought to press on these issues a little more. I simply wouldn’t feel comfortable sharing this book with non-Native students unless I did a lot of prepping and contextualizing first to help them avoid stereotypical thinking–and even then, I’m not sure I would be wholly successful. 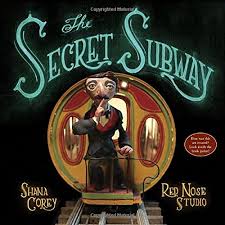 An unqualified hit for both of us, The Secret Subway tells the little-known story of New York’s very first subway, built and abandoned years before the real subway got started. Red Nose Studio’s illustrations are incredible, and Shana Corey’s writing manages to appeal to all age groups, which is so hard in nonfiction picture books (so often they’re either too simple to appeal to older students or too complex to appeal to younger students). Just the right amount of information, just the right amount of complexity, and some strong craft choices. This book was a delight to read aloud and sparked much wonder. 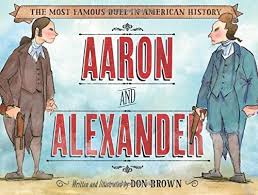 Don Brown is one of my very favorite nonfiction writers for children, and I have never read a picture book by him that I didn’t love–until now. Don Brown’s Aaron and Alexander did not work for me.  I found this book so confusing! I couldn’t keep Aaron and Alexander straight at any point in the story, and I had to rewrite most of the sentences as I was reading aloud because the vocabulary and sentence structure were far too complex for my son to follow. In the end, I had a hard time caring that Alexander died, because I felt I barely knew him. This may have been a story where I just didn’t have enough background knowledge to be a good reader. 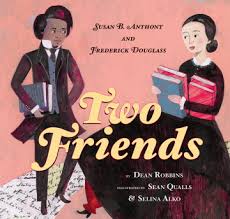 We were delighted by Two Friends: Susan B. Anthony and Frederick Douglass. This is a quiet but powerful book about a friendship between two important activists for human rights. There is a simple set-up: the two friends sit down to tea. Really nothing more happens in the story. They sip their tea while it snows outside. But there is plenty of drama and interest in the back story of how each activist discovers their calling and their voice. Dean Robbins uses repetition so beautifully in this story; the writing is a pleasure to read aloud. And the illustrations by Sean Qualls and Selina Alko are bright and cheerful.