Sara Pennypacker has had quite the year. It’s possible that two books by her could end up on my Top 10 of the year. I was so sad when she wrapped up the Clementine series. That felt like a real reading loss. And I was skeptical of a new series starring Waylon, one of Clementine’s classmates. Waylon just didn’t seem that interesting to me, but I think now that’s simply because Clementine takes up so much of the space in a room. Waylon, it turns out, has a deeply interesting inner life. He’s a sciencey kid–and he thinks big. Like counteracting gravity big. There are many engaging narrative threads in Waylon! One Awesome Thing: Waylon’s science projects, wonderings, and schemes; a scary new kid who might be a criminal; how it feels to be left out when a popular kid divides the class into two teams and doesn’t put you on either one; and the growing up and growing apart of a beloved older sister. It all comes together in a satisfying conclusion that also opens the door to many more Waylon adventures.

Skunk on a String is a wordless picture book following a skunk’s aerial adventures after he is somehow tied to a helium balloon. Illustrator Thao Lam cleverly uses different design elements and page layouts to convey the skunk’s movement across a city. This reader assumed that the skunk was working hard to free himself throughout the story, but then there’s a funny twist that calls that interpretation into question. The illustrations are very strong: cut-paper collage using a vibrant pastel color palette.

Diana’s White House Garden tells the true-ish story of Diana Hopkins, a girl who lives in the White House because her father works for President Roosevelt. Diana wants to help the war effort. She has many ideas which don’t work and mostly just get her in trouble before she lights upon the one idea that does work and that even brings her a bit of fame: helping out in the White House Victory Garden. This is a well-written story with engaging illustrations that bring the period and characters to life. One frustration: inadequate back matter to provide a larger context and cite sources.

Yaks Yak: Animal Word Pairs is such a clever and simple concept: Linda Sue Park identifies animals whose names are homographs (words with the same spelling and pronunciation but different meanings) and writes little two and three-word stories about them. Yaks yak. Slugs slug slugs. Etc. The book succeeds splendidly, in large part because of Jennifer Black Reinhardt’s hilarious illustrations featuring the odd situations these animals find themselves in. I especially liked the spread of “Badgers badger,” with pairs of badgers talking each other’s ears off.

Hello, My Name Is Octicorn features two of my favorite creatures, the octopus and the unicorn, blended into one Frankencritter, the octicorn. It’s a fine concept for a picture book, but it never really takes off. The jokes fell mostly flat for me, and while there is a sort of overarching story about feeling different and not fitting in, the book isn’t very interested in developing that theme in a rich or memorable way. I do love that kids could obviously draw the Octicorn and create their own adventures with him. 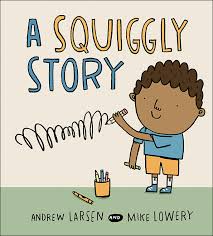 There is much to love about Andrew Larsen’s story about a little boy who longs to be able to write like his sister can. Sometimes he pretends, but he’s just making squiggles on the page and he discounts his creative effort entirely. His wise older sister, however, helps him see that the marks on the page really do tell a story. A clever and sweet story that will help even the youngest and most inexperienced writers feel confident that they, too, are writers. A must-have for elementary writing workshop. Mike Lowery’s illustrations are a big part of what makes this story work–and I so appreciate that he made the kids brown.

I would never have picked up this reissue of Margaret Wise Brown’s The Dead Bird if it hadn’t been for the illustrations by Christian Robinson. The illustrations are brilliant, of course, but the big surprise for me was the writing. This is a really effectively written book about death. It’s stark and sober, yet infused with compassion and beauty. I’m not sure I’ve even read anything by Brown except for Goodnight Moon and The Runaway Bunny, and what I primarily remember from both of those titles are Clement Hurd’s iconic illustrations. I’ll be looking for her other books and hoping to find writing that’s just as clear and elegant as the writing in The Dead Bird.