So many pictures books, as it turns out. I’m in a mad reading dash to the end of the year, working through various piles and stacks around the house–as well as bringing in several dozen new books, as if I didn’t already have enough.

I’ve spent many happy hours over the past week perusing the annual “best of books” lists for 2016, and came across Jill Lepore’s Joe Gould’s Teeth on one of them. It won’t be making my own Best Books list, but it’s definitely the oddest book I’ve read this year.

Joe Gould was the subject of two memorable New Yorker profiles written by Joseph Mitchell, the first in 1942 and the follow-up in 1964 (Lepore’s book also began as a New Yorker piece and, for better or worse, reads like an extended magazine profile). Gould’s claim to fame–in addition to friendships with writers like William Carlos Williams and e.e. cummings–was a massive, unpublished oral history project that seems to have consisted mostly of Gould sitting down in public places with his notebook and writing down everything the people around him said. If it existed at all. By the time Mitchell published his second New Yorker piece, he was convinced the book never existed, and Lepore could never quite confirm yay or nay. Gould’s famous writer friends, however, seemed convinced Gould was the real deal, a literary genius, and constantly sought publication and patronage for him. It’s difficult to see why. Lepore includes many excerpts of Gould’s letters, and his writing is flat, verbose, not particular lucid.

Gould’s writing is only part of the story, however: his mental illness is the other part, and some of the saddest passages in this sad book focus on the treatment he received when institutionalized.

In the end, I’m not sure what to make of Joe Gould or this book, and I’m not sure Lepore is either. She spends a semester combing archives for evidence of Gould’s oral history project, but later when an elderly man gets in touch to say he has one of the notebooks, she chooses not to return his call. Maybe, after all she discovered about Gould’s repugnant beliefs about race, groping of women, and downright stalking over a period of decades of sculptor Augusta Savage, she just didn’t care anymore. 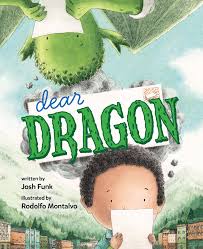 Josh Funk’s Dear Dragon is a clever story about two pen pals who have the wrong idea about each other. George is a boy, and Blaise is a dragon, and they naturally assume their new friend looks just like them. This fundamental confusion invites wonderfully comic illustrations, as what one writer meant is envisioned so differently by his reader. This is a picture book that works on multiple levels–it’s a comical story of mistaken identity, friendship and adventure that could spark rich discussion about the assumptions we make about other people and the ways that we read and misread based on our own perspectives and subject positions. 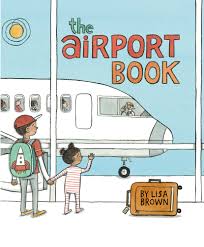 So much to love in Lisa Brown’s The Airport Book. The illustrations are crammed with so many interesting things to look at and wonder over. A book I could have spent hours pouring over as a child and a book I really wish had existed before my son took his first flight. I imagine many children will be informed, comforted, and delighted by this book. 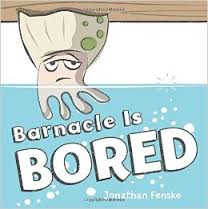 Barnacle Is Bored made me laugh out loud. I was NOT expecting that ending. The perfect antidote to complaints of “I’m bored” and a very simple story that will please all ages. 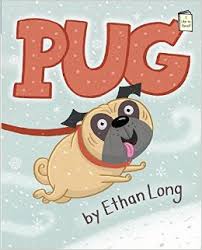 A solid very early reader from Ethan Long. I was impressed by how much plot and character Long creates through such extremely limited vocabulary. Illustrations are cute, but not particularly special, so the very limited vocabulary actually carries most of the weight for story-building. 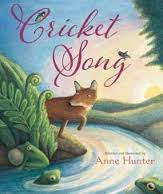 Anne Hunter’s Cricket Song is a beautifully written book, but I did struggle a bit with the writing, I think because it’s mostly image without character or plot. The illustrations, however, work to make the story tangible and concrete; they provide a narrative that will require some piecing together by child readers. Each page consists of two images: the nearly full-spread image of different animals going through their evening and nighttime routines along with a narrow border along the bottom of the page that serves as a chronological and geographical timeline that tells the story of the end of one day and the beginning of another. 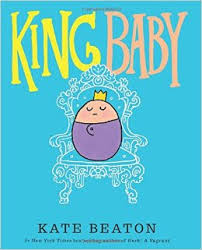 King Baby is such a familiar story. It’s cute, and I was amused by the increasingly beleaguered and exhausted expressions on the faces of the demanding baby’s parents. But every beat of the story will be predictable to readers who have read the many other picture books with this particular plotline. Beaton’s first picture book, The Princess and the Pony, was so fresh and original; I was surprised she didn’t do a little more with King Baby. 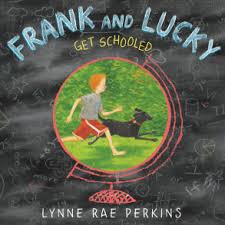 I love the message of Lynne Rae Perkins’s Frank and Lucky Get Schooled: learning is all around us, and if we know how to look and wonder, we can see the subjects we study in school informing so many aspects of our daily lives. I wish the book had been longer or shorter: it’s a little too long and text-heavy to work fully for me as a picture book, yet not developed enough to be some hybrid new form of illustrated novel. It might be one to work through slowly with an older elementary group. 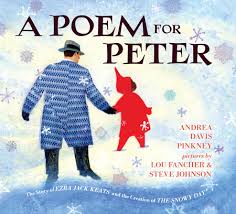 Andrea Davis Pinkney’s A Poem for Peter is a wonderful introduction to the life and work of beloved children’s book author and illustrator, Ezra Jack Keats, with a particular focus on the creation of the classic picture book, The Snowy Day. Pinkney combines the praise poem and biography to create an exciting new way to write about an author’s life and work. In one of the afterwords, Pinkney writes about her choice to use “collage verse” to mix narrative and verse, fiction and nonfiction, to tell this story. The end result is a kind of “tapestry,” an apt metaphor for this unusually rich biographical portrait.

Roxanne Orgill’s Jazz Day is another hybrid nonfiction picture book written as poetry. Orgill presents a multilayered portrait of the people involved in the makings of a famous photograph of great jazz musicians, taken in 1958 to illustrate an Esquire magazine article. I think I would have enjoyed the writing in this book more if I had a little more background knowledge. But for me, the writing was secondary to Francis Vallejo’s incredible art. A book I want to look at again and again. A fold-out reproduction of the famous photo is a nice feature, and there is ample back matter, including mini-biographies of the jazz musicians and singers Orgill features in the poems. 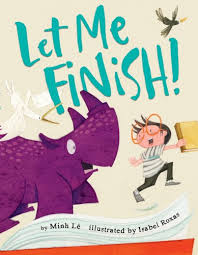 Let Me Finish! will delight readers who hate spoilers. Our ardent reading hero simply wants to finish his book, but he keeps getting interrupted by friends and strangers who want to share their own experience reading the book–by spoiling the ending and ruining his reading pleasure.  A book I will enjoy sharing with my Children’s Lit students.

Penguin Problems is a very funny book about, yes, penguin problems as perceived by a cranky penguin who perpetually sees the glass as half empty. Complain, complain, complain. There is a moment when you think the penguin has seen the light and just might find the glass half full, but no. Very strong art by Lane Smith including one of the most dazzling covers of the year. 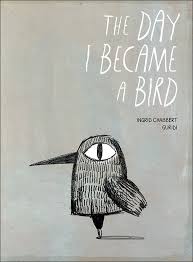 The Day I Became a Bird is a bit weird, more than a bit wonderful. As with so many translated picture books, there is something unresolved about the story. There is a great deal of space for the reader to work, which I appreciate. It’s a simple story of a boy who adores a girl who only has eyes for birds. So naturally he decides to costume himself as a bird to catch her eye. 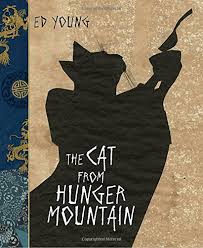 This fable from Ed Young was a bit heavy-handed for me, though I did find the illustrations quite interesting.

What a delightful story. Stripes the cat longs to be a tiger, wild, fierce, and just a little bit vicious. When he meets a real tiger who longs to be a pampered house cat, they realize a simple switch will make both their dreams come true. I especially loved the illustration of Stripes absconding with a chicken leg. Zorro did this exact move with my French toast earlier in the week.