Matt Phelan transports the Snow White fairy tale to 1920s New York with magical results. The fundamental elements of the tale are still there, but there are so many creative choices that will resonate for older readers: the seven dwarves have become seven street kids; the glass coffin has become a picture window at Macy’s; the vain stepmother has become a dancer from Ziegfield’s Follies. Phelan relies heavily on wordless sequences to tell the story, and while the art is absolutely gorgeous, I did find it challenging at times to follow the story and figure out who was who and exactly what was happening.

In an ideal world, I’d have an excuse to read a Ballet Cat book aloud at least once a week. I decided we needed something a little lighter for a read-aloud in Children’s Lit, and Ballet Cat always makes me happy. I was so disappointed that not a single student picked up the second book in the series during our reading time. I might just have to read it aloud to them!

The Maggie B. is an older picture book (1975) by Irene Haas and I know I would have loved it as a child (and maybe I read it and just don’t remember). It’s about a girl who sets off on an imaginary seafaring adventure with her little brother. Mostly they eat. There are long passages describing the sea stew she makes and the muffins and the peaches with cinnamon–and since I couldn’t get enough food writing as a child, this would have had deep appeal. The illustrations are the kind to get lost in and imagine you’re there on the ship too.

Four Feet, Two Sandals is another strong title to add to your collection of stories about refugees. This well-written book portrays two Afghan girls living in a refugee camp in Peshawar.  They bond over a shared pair of sandals. I did find the ending problematic, and I would have appreciated more back matter.

My Baby Crocodile is a quirky story of a near-sighted crocodile who finds what he thinks is an abandoned baby crocodile, but as the reader quickly realizes, the baby crocodile is actually a baby knight in armor. The two have a series of adventures and comical miscommunications. Even after the crocodile discovers that his baby isn’t a crocodile at all, he’s determined to stick with him. Unfortunately, interspecies trust only goes so far, and before too long the two are so deeply suspicious of each other that they decide to separate. If you enjoy picture books in translation, this one is definitely worth a look. 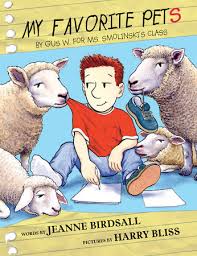 A funny picture book written as a school report. I’m sure this one won’t stick with me for very long, but I did enjoy Harry Bliss’s illustrations and the dry humor of Gus’s narrative voice.