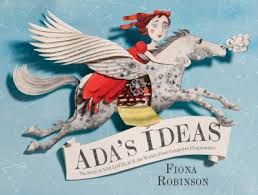 For those who struggle to comprehend much math or computer talk (like me!), biographies of Ada Lovelace can be tricky. Much as I want to love her, I just can’t quite understand what her big ideas were. But Robinson translates Lovelace’s ideas into language that even I could follow. And the art is exquisite. A book I’d like to own just so I can look at the pictures regularly. 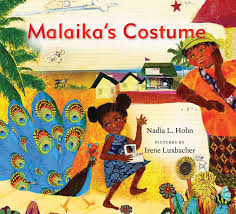 Malaika’s Costume is a book I very much wanted to love, but I struggled with certain aspects of it. First, the unspecified location where Malaika and her grandmother live.Is it an island in the Caribbean? Is it an island off the coast of South America? Is it West Africa? At different points in the story, I could imagine any of these three. The unspecified location leads to an unnamed culture celebrating Carnival. Carnival has important cultural significance in some locations, but because it’s a Carnival that happens anywhere and nowhere, it’s been stripped of its cultural meaning for the sake of the story. And finally, the language. Malaika and her grandmother speak what is probably meant to indicate a dialect, but it veers to stereotype. Is the language meant to represent a translation of their native language? If so, why use incorrect grammar? Are the two meant to be speaking to each other in English? If so, why? I did love the art, but I needed more specificity about place, culture, and language to understand the author’s choices and to feel comfortable sharing this book with younger readers. 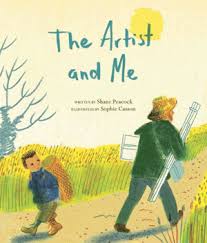 The Artist and Me packs a punch! It’s a story of Vincent Van Gogh in the last years of his life, told from the perspective of a child who teased and bullied Van Gogh. The book makes it very clear that we fear what we don’t understand–people who are different, art that doesn’t follow accepted rules. Once we connect, we can no longer fear and we can have compassion and empathy. There is a painful moment when the child is offered this moment to connect–and doesn’t take it. There is much to think about and discuss. It would make a good pairing with Each Kindness and some of the Trudy Ludwig’s books. Sophie Casson’s art is really gorgeous and captures the spirit of Van Gogh’s paintings and the feel of his world. 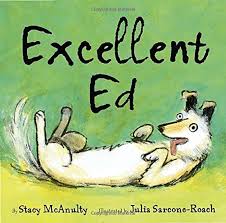 My favorite picture book of the week! Excellent Ed is about a goofy dog named Ed who lives in a big family (a brown family!) full of talented kids who are all excellent at something. Ed isn’t sure what he’s excellent at, and he’s pretty sure that if he were just more excellent, he’d get to do the things the family does–sleep on the couch, ride in the van, use the indoor bathroom. He tries to prove his excellence to himself but is always upstaged by one of the kids. Eventually, the kids help him figure out what he’s excellent at–all kinds of doggie things. A really sweet story about embracing our strengths and being happy with ourselves as we are. Lots of visual and verbal humor as well. 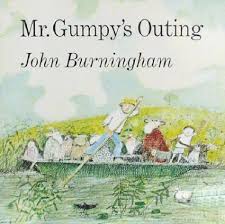 Mr. Gumpy’s Outing was first published in 1970, and I think it would still be a delightful read for young children. Mr. Gumpy grudgingly says yes to all of the many creatures (including two children) who wish to join his boat outing–as long as they follow his rules. The children, for instance, aren’t to squabble; the cat is not supposed to chase the rabbit; etc. In the end, they all do the thing they are not supposed to do–and chaos ensues. I loved, and I mean LOVED, the art, and I don’t even understand why. I really need to develop a better vocabulary for thinking and talking about art! 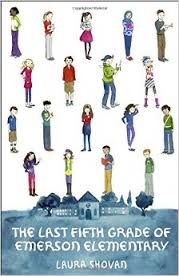 Laura Shovan’s The Last Fifth Grade of Emerson Elementary is a verse novel (with notes on the different poetic formats used along with some writing prompts at the back) featuring the voices of a very diverse fifth grade class as they compose poems to go in a time capsule. Over the course of the novel, we get to know the various students and their out-of-school lives and problems, but the main plot here focuses on the students’ feelings, fears, and protests after they learn their elementary school is going to be torn down and replaced by a grocery store. This is a really impressive debut novel: the poems are strong; the individual characters unique and engaging; and the themes topical and important. 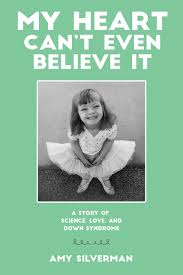 My Heart Can’t Even Believe It is journalist Amy Silverman’s memoir of raising her daughter, Sophie, who has Down Syndrome.  I found the book frequently interesting, but also felt it couldn’t quite decide what it wanted to be: a parenting memoir? A medical memoir? A scientific-for-the-lay-person explanation of Down Syndrome? It reads more like a series of articles and blog posts. There are long sections where we get far away from Sophie and Amy as Amy interviews doctors and research scientists. Worth a read for those who like parenting memoirs and medical memoirs (there is quite a bit of information here about the medical problems faced by children and adults with Down Syndrome).