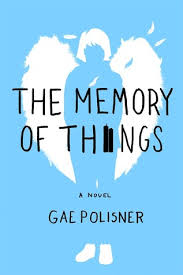 It can’t be easy to write fiction about 9/11. Plot must always be in danger of taking over, and it’s tricky to write about such an emotionally charged event without being overwrought. It must be even trickier to write about the event as it’s unfolding without allowing hindsight to influence the writing: what event is more meaningful in recent American consciousness than 9/11, and yet what event has meaning as it’s unfolding? Gae Polisner is up to the task and writes a beautifully moving and delicate novel about 9/11 from the perspective of two characters, a boy and a girl, who meet for the first time in the chaotic aftermath of the planes crashing into the Towers in New York City.  It’s a novel about the events of that day and that week, but even more, it’s about character, about family and friendship and connection and growing up.

My son and I got started on a Batchelder Award reading challenge with a read-aloud of The Ballad of a Broken Nose, originally published in Norwegian. It’s the story of thirteen-year-old Bart, who takes boxing classes and loves opera and is trying hard not to be lowest on the totem pole and the target of bullying at school. His home life is not easy: his mother is an alcoholic who can’t keep a job, and they live in an apartment building where they must pass strung-out heroin addicts and discarded dirty needles on the stairs.  Though he has real potential as a singer, Bart also suffers from debilitating stage fright and can’t even sing in front of his own grandmother in the living room. Ballad is a slim novel tackling what seems like an unwieldy number of topics (in addition to the above, there is also Bart’s search for his unknown father and a burgeoning friendship or perhaps more with one of the popular girls at school), but the author pulls it off, largely on the unifying strength of Bart’s voice as a character. He’s believable, wry, thoughtful, and affecting. The ending offers hope even though not everything is wrapped up tidily.

XO, OX A Love Story is some brilliance written by Adam Rex and illustrated by Scott Campbell. It’s one of those books that I want to push into everyone’s hands. I also elected to read it aloud to my Special Methods class last week, and can I say FINALLY! A class that laughs in all the right places. So often I read hysterically funny picture books to my college students and they sit there, blank. Do they not know it’s funny? Do they not know it’s ok to laugh? XO, OX is very, very funny. And also so perfect in its pacing and elegant language.

Sometimes it feels like there’s nothing new under the sun, and yet another picture book about a child whose parents won’t get her a pet and who must make do with a sad, non-pet which she nonetheless manages to have petlike experiences with…. well, I’m pretty sure I’ve read this exact story at least a dozen times in the last year alone. The twist at the end felt predictable too. Still, it’s a popular plot for a reason, and Charlotte and the Rock manages to be quite charming, thanks to Stephen Martin’s tight writing and Samantha Cottrell’s stylish illustrations.

Another winner from Aaron Reynolds and Matt Davies, this time a cautionary tale about paying more attention to the online friends you may or may not even know than to your IRL pals.