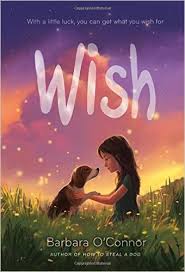 Wish is simply wonderful. A heartfelt story about a girl who thinks she knows where she belongs but discovers the home she prefers. I especially loved the setting in the Blue Ridge Mountains of North Carolina and the strong Southern voices of the characters. So often Southern is overdone, but O’Connor gets it just right.

For some reason, Awkward never quite clicked with me. I started it well over a year ago and would periodically pick it up and read a few more pages, then shelve it again. It’s been a big hit in my lending library, though, and has actually been that first graphic novel that hooks a reader onto the form for a few of my readers. So it’s one I will enthusiastically book talk even though it wasn’t the right book for me. 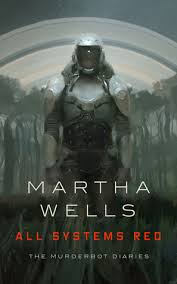 All Systems Red was a recent Alex winner, which is how I discovered it, and definitely one of my favorite recent reads. The action starts on the second page and never lets up until the somewhat abrupt ending 150 or so pages later. (It’s the first in a series of four novellas, which explains the abrupt ending. It’s not an entirely unsatisfying ending, thankfully, just abrupt.) Our narrator is Murderbot, an AI gone rogue, who is taxed with providing security for a group of scientists conducting field work on an unexplored planet. Murderbot is a surprisingly engaging narrator–stuck in his own existential crisis, scornful of humans yet also fascinated by them, wanting to keep his secret (that he’s no longer under the control of humans) at all cost. When the mission begins to go wrong, he has to work more closely with the humans than he would like. A slam dunk for readers who love sci-fi and a great entry into the genre for those who haven’t read sci-fi before.

I’m smitten with The Five Forms, about a girl who discovers a book of martial arts forms and ignores the warning to only practice under the guidance of an expert. As she attempts the postures, the forms (crane, snake, leopard, etc.) come to life and wreak havoc. McClintock outdoes herself with the art, with the chaotic wordless spreads at the center of the story being especially fine.

I loved John Parra’s art for Frida Kahlo and Her Animalitos, and I loved the concept–a biography of Frida Kahlo as an animal lover. There are the usual cats and dogs and birds, but Kahlo also had more unusual pets–monkeys, turkeys, an eagle, deer. The text did not work as well for me: I found the organization confusing and struggled to put the story in chronological order. But perhaps that wasn’t really the point? In any case, it’s a charming introduction to Kahlo’s art and life.

There Might Be Lobsters is the story of how Sukie, a very small and very scared dog, becomes brave. Sukie is less than thrilled at the prospect of a day at the beach: she doesn’t like new things, and besides, there might be lobsters. In the end, though, she conquers her fear in order to save her best friend. Carolyn Crimi’s text is perfectly paced and often very funny, and Lauren Molk’s illustrations convey so much emotion and humor. A most excellent picture book.