What’s In My Notebook: Slice of Life #sol18 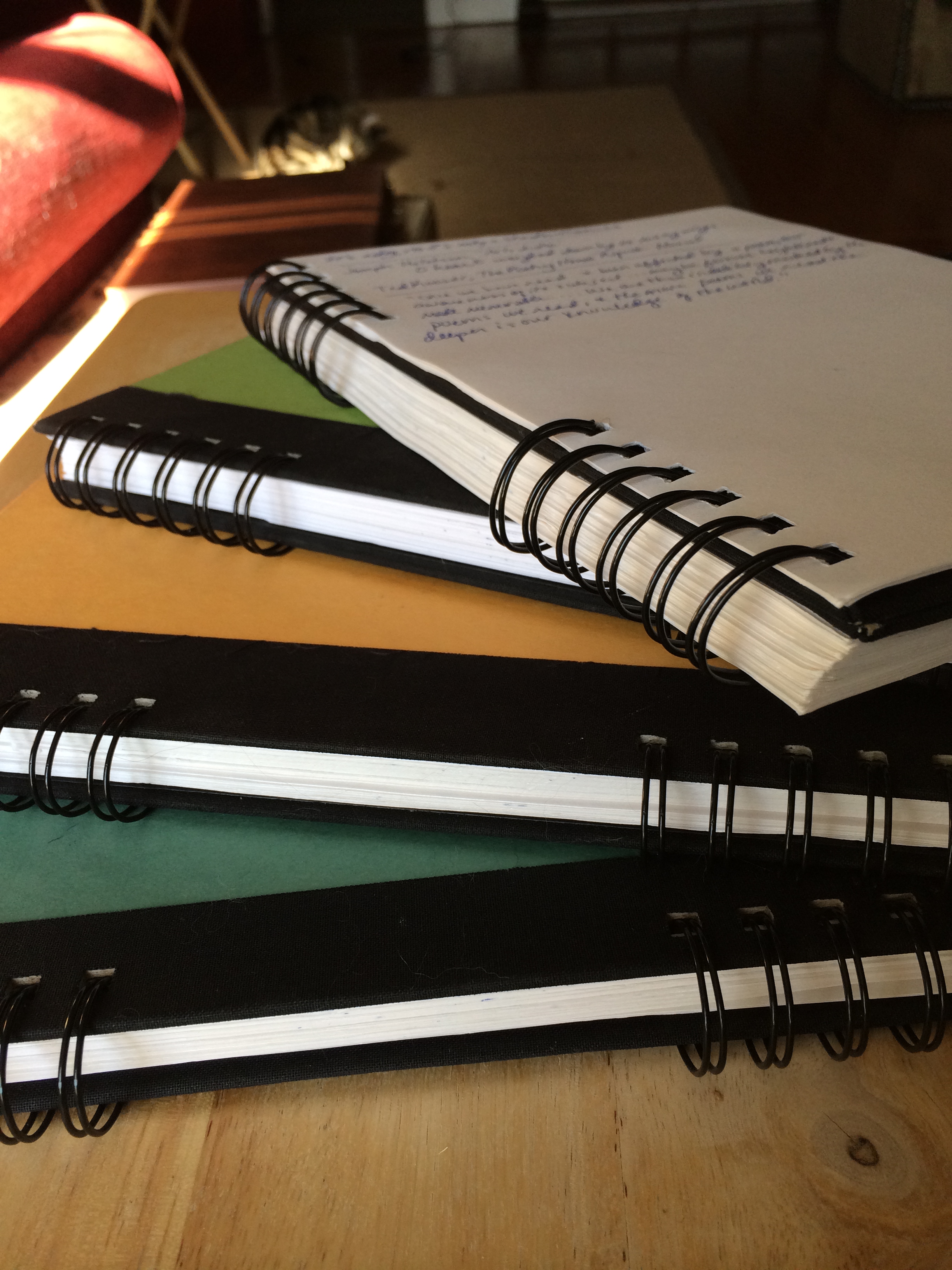 I have never been the kind of writer who finishes a notebook in a month or two–until now. I filled an entire notebook in March and April! I have been keeping notebooks all of my adult life–sometimes sporadically, sometimes with daily dedication. But I fill them slowly.

I like to write about my notebooks. In fact, they’re a reliable source of inspiration whenever I’m stuck and can’t find a topic. Today I want to write about my notebook even though I have plenty of other ideas in mind. I feel so relieved to be back in prose after a month of constriction in poetry that literally everything sounds wonderful to write about. The beautiful black cat purring on my shoulder. The other beautiful black cat curled on my lap under a blanket. My socks (currently mismatched and inside out because I fished them out of the clean laundry basket in the dark). The weather (cloudy with a chance of rain–delicious!). Coffee (sadly finished, and I’m trying to cut back to one cup a day). All of this will probably go into my notebook later.

But today I want to celebrate this particular notebook because I couldn’t have completed 61 straight days of slicing and poetry without it. My notebook contains the seeds and drafts of everything I published in March and April–61 new pieces of writing that didn’t exist before they began in the notebook.

But it also contains so much more.

All the seeds that never grew into anything. There are the notes I took after I completed an online quiz, What Animal Are You? (Thanks to Margaret for sharing the quiz and the wonderful poems her students wrote in response.) According to the quiz, I am a zebra, and there were so many wonderful and absurd lines about the zebra that I had to write down:

You should never flirt with a zebra unless you mean it.

A zebra has a love for things tangible, a distaste for physical labor, and a strong sense of justice.

Once the zebra’s mind is made up, it is difficult to shift its position.

There is the list I began of things my son says that I thought I wanted to write about. “Gray cats are RUDE.” Or “People like less” when I mentioned that I was planning to publish two poems on my blog for one day of the poetry writing challenge.

There is a list I started of made-up collective group nouns after I fell in love with a list of real bird group nouns. A sadness of umbrellas. A fury of kittens. A congress of storm clouds.

There are the odd lines that popped into my head that I saved but never knew what to do with. The ring-tailed lemur lives muchly on the ground. Poetry is a making and a doing, not a waiting and a hoping. A teacup is a symbol of a kitten.

There are many nearly complete but ultimately abandoned drafts. The story of running into a former student who praised my class and me to the skies–even though in my memory, he rarely came to class and when he was there, he mostly texted on his phone and when he did submit papers, they were always plagiarized. Several attempts at a poem about my sweet old dog, Roxy. A poem about the poet as a child and the poem as a playground that I worked on for so many hours only to realize I was forcing the metaphor–which should have been obvious to me from the beginning.

There are notes from my reading and quotations I want to remember and prompts for poems and notes about new-to-me poetic forms to try.

There are freewrites and quickwrites I completed alongside my students. There are lesson plans and ideas for course improvement.

That is all the stuff that might become public.

And then there is all the private stuff. So many lists. Grocery lists and lists of library call numbers. Lists of TV shows to try on Amazon or Netflix. Lists of podcasts to listen to. Lists of errands to run.

My notebook also catches all the hard stuff. The daily challenges of parenting a high-needs child. Anxiety and overwhelm. Self-doubt. Regrets. It catches the ugly stuff that I wouldn’t share with anyone else. Impatience. Self-pity. Exasperation. And all the complaints. Fuss, fuss, fuss. Petty annoyance, silly frustration, irritation that should have been let go of a long time ago. Those entries help me process and move on at the time, but they’re not ones I like to reread later.

Still, my notebook holds it all.

Michelle has declared May the Month of the Notebook, and even though March and April were also the months of the notebook for me, I want to follow her lead and prioritize notebook work this month.  I will finish my current notebook in the next day or two, and then I will decide which color–blue, green, or orange–I’m in the mood for next. I have a shelf of brand-new blank notebooks, my favorite hard cover unlined Cachet spirals by Daler Rowney, the ones I’ve been using for ten years now. When I buy them, I buy in bulk. I don’t have a specific writing challenge for May, so I don’t know what I will write. But I do know that my notebook will capture it all.

Like Loading…
← What a Poem Needs #NaPoWriMo18 #NPM2018
→ “I Cried So Many Times:” Favorite Reads from a Children’s Literature Course