There are many reasons why I love living in South Dakota, and one of them is definitely its high number of oddball roadside attractions. Life-sized or near-life-sized or just really, really large dinosaur replicas abound. (I drove by three of them yesterday, and I wasn’t even trying.) There is a whole “palace” made of corn. If you’re looking for the world’s largest pheasant statue, look no further. 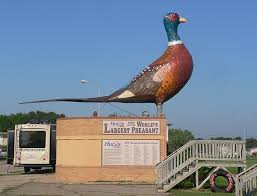 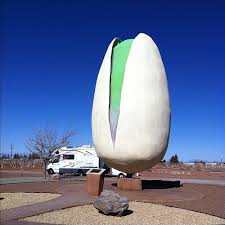 Yesterday, we went on an outing to one of South Dakota’s very best kitsch-free roadside attractions, the Badlands. It had to be one of the most beautiful days of the year to visit. Such blue skies and green grass to contrast with the layered sedimentary rock. We saw license plates from every state except Hawaii, but it still didn’t feel too crowded. We stopped at several overlooks for photos and then hiked the Notch Trail. 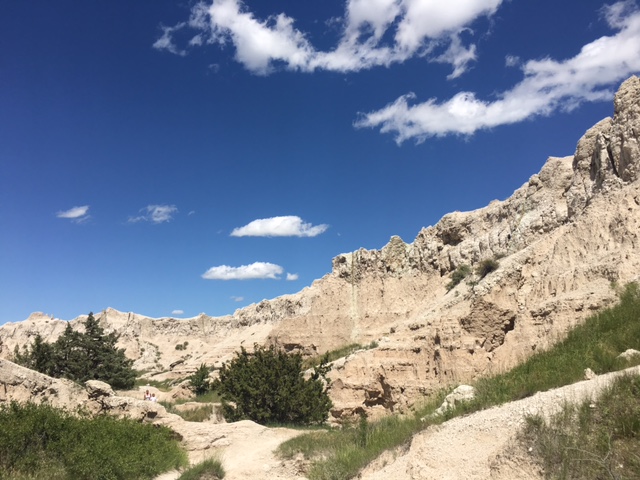 It wasn’t a great day for wildlife–a lone buffalo grazing as we entered the park, a single pronghorn standing in a prairie dog town. But there near the exit was a small herd of bighorn sheep. Even from a distance, their improbable horns looked gigantic and so very heavy. Two males leaped into the air and clashed heads, then immediately settled down to keep grazing. There were no pull-offs, so cars simply parked on the road in both directions to watch. 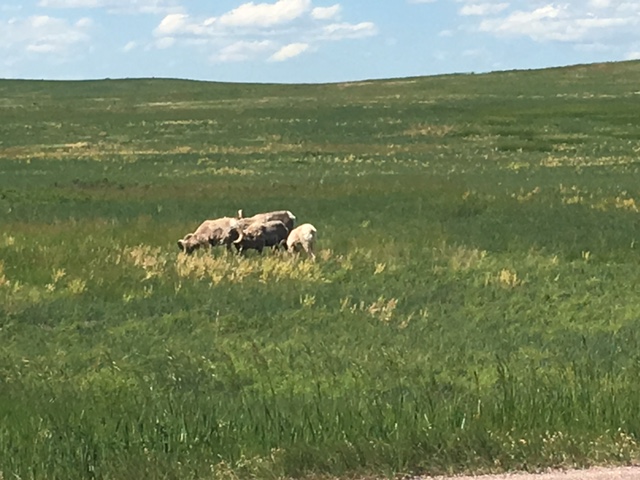 The views and the turny-twisty road and the hike and the bighorn sheep are probably what I will remember from the day, but it wouldn’t have been an outing in South Dakota if it hadn’t been bookended by kitsch. Before entering the park, we made a quick stop at Wall Drug, perhaps the world’s ultimate kitschy roadside attraction, for donuts. 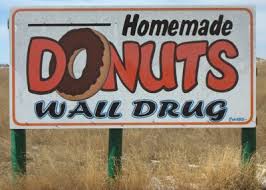 And to make it the most red letter of red letter days, after we exited the park, we just happened to stumble upon the world’s largest prairie dog statue. I had added this to my list of possible South Dakota field trips years ago, but my family never wanted to go. My husband and son, it turns out, are not the kind of people who feel compelled to exit the expressway for, say, a statue of the Jolly Green Giant. 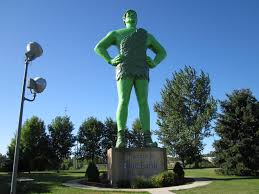 Or to go out of their way to see a twelve-foot tall statue of a prairie dog. But I don’t think they minded seeing it since it was already on the way.

I didn’t stop for a photo. I have to confess that I was a little put off by the live prairie dog town right next to the statue where a family was walking among the burrows and a little boy stood over a hole wielding a giant rock, presumably ready to beam an unsuspecting prairie dog on the noggin should one emerge. 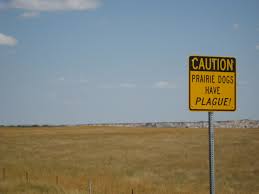 Maybe this family hadn’t yet driven through the Badlands and seen this sign. But all I could imagine was swirling pathogens, just ready to infect them with plague. It seems unlikely that humans could become infected with bubonic plague from prairie dogs, but the little rodents carry it and so it’s not totally outside the realm of possibility.

But even if plague-infested, a prairie dog town where a sign cautions you to “feed only unsalted prairie dog food” does make for a pretty stellar roadside attraction. 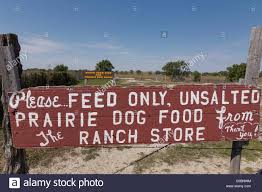