The Problem with Travel: Slice of Life #sol18

The problem with travel, of course, is that cats must stay home.

I know there are cats who travel, because I’ve read the books. Peter Gethers’s The Cat Who Went to Paris, for example, which I read when it was first published in 1992, convinced me I needed a traveling cat, preferably a Scottish fold.

It takes a special kind of cat to seek adventure.  When she was a kitten, Wilhemina was just such a cat.

We drove cross country one summer. She sat on the dash and watched the scenery go by and napped under my feet. She was small enough to fit into my purse, so I smuggled her into motel rooms and then into a campus dorm room at a conference. She was eager to explore a new space and seemed to think that every place belonged to her. That was long before she grew into the cranky tyrant who now has to live with Grandma because she prefers being an only cat. (Not that she gets to be an only cat at Grandma’s either, but living with 3 other cats is far preferable to 7 or 8.)

My cats now are shy homebodies who have a strict routine that involves exerting themselves during the day only to move from one favored napping spot to another. A new object is nothing to fear as long as it can be turned into a bed. 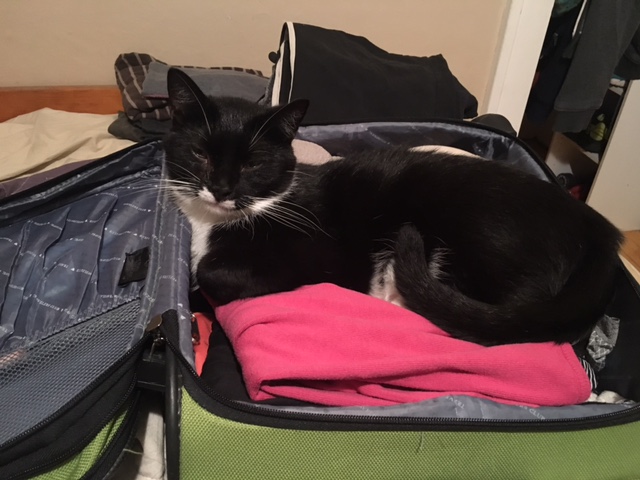 I know they’re happier at home, but I miss them when I’m on the road. I miss them most at night. When I try to fall asleep, it feels like something is missing. Most nights, there are two or three stretched out or curled up on top of me and two or three more nearby. There is barely room in the bed for the humans with all the cats. Sometimes I fall asleep with Toast on my chest and wake up in the morning to find her still in the same spot. I don’t know how she can sleep for eight more hours when she’s already slept for something like twelve, but at least I know she is well rested.

Last night, as I attempted to fall asleep in a hotel room sans cat, I wondered why my white noise app doesn’t have an option for Purrs.

26 responses to “The Problem with Travel: Slice of Life #sol18”