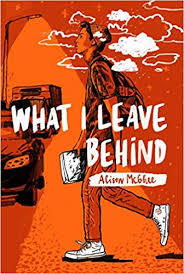 Alison McGhee’s What I Leave Behind is a bit of a writing stunt–100 chapters of 100 words each–and a good reminder of how powerfully effective rules and limits can sometimes be on art. I hate that the Good Reads description reveals in its first few words what it takes McGhee nearly half the book to reveal about her main character’s struggles (most readers will have guessed by that point). Will is the protagonist, and he is just getting through his days the best he can. Walking is his preferred way of dealing with his problems, and his walks and his job at the Dollar Store slowly begin to connect him to the world again. A delicate and often really beautiful book about grief and kindness and connection. 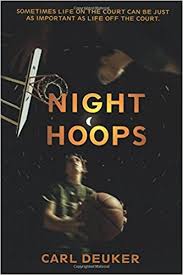 My son and I just finished Night Hoops as our read-aloud, and it was quite good. I maybe liked it more than I normally would have because he was really engaged by it, fighting sleep to stay awake for just one more chapter, and because our last read-aloud was the clunky Black Panther middle-grade novel. Night Hoops read aloud so smoothly by comparison. There’s lots of believable (mostly!) basketball action as well as a compelling realistic YA plot about parents divorcing, a dad who’s mostly interested in his sons for their athletic achievement, and a bully across the street who sort of becomes a friend. Plenty happens, but the pacing helps the story never feel rushed or like there are too many plot lines. I really liked that nothing much is resolved at the end, though I think my son was frustrated not to have more plot threads wrapped up. 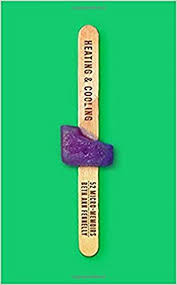 Beth Ann Fennell’s Heating & Cooling: 52 Micro-Memoirs is a tiny book of tiny memoirs, some just a couple of lines long, others a few pages. Fennelly is a poet, and I really appreciated the craft and language in these pieces. Not all of them hit the spot for me as memoir, but it did make me want to read more collections of micro writing.

U.S. History is one of my son’s courses in online school this year, and I’ve been so disappointed by how boring the textbook manages to make some pretty exciting and interesting stories. Exciting and interesting enough that I still remember many of them from when I studied U.S. History for the last time–which must have been 9th or 10th grade. Unlike the people who write textbooks and design K-12 online courses, I am determined not to kill my son’s curiosity in every single school subject, and so we are taking a different path to learning American History–through documentaries and picture books. Jean Fritz’s series of short chapter books about American history, many of them illustrated by famous illustrators including Tomie dePaola and Trina Schart Hyman, is excellent.

Clever story of a sloth who moves from his zoo to the zoom, where all the animals are Type A and rush, rush, rush from one task to the next. Sloth has a different idea about how to live, one that involves being present and noticing the world at his own pace. 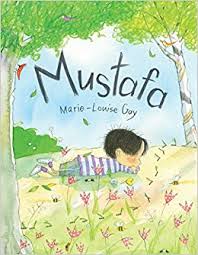 Mustafa is another winner from Marie-Louise Gay, this one about a young boy who has left his home and immigrated to a new country where he doesn’t have friends or know the language. His observations and interactions with the natural world keep him company as he becomes acclimated and eventually makes a friend.

Here’s a story you don’t see very often in children’s books: a young girl accompanies her mother to a big awards show because she has been nominated for an award. I checked this out because I’ve been trying to read all of the books that Vanessa Brantley-Newton has illustrated, and I didn’t even look at the name of the author. Who happens to be Quvenzhane Wallis, who was nominated for the Best Actress Academy Award for her work in Beasts of the Southern Wild.  What a weird story, I thought to myself when I finished it. Then I looked at the author’s name and thought, Oh. Now it makes sense.

Daniel Miyares takes Langston Hughes’s “Dream Variation” poem and illustrates it so beautifully to illustrate the realities of racial segregation and a vision of what the world could be like instead. Really a stunning picture book.

I also finally got my hands on Oliver Jeffers’s Here We Are: Notes for Living on Planet Earth, which is a quirky, funny, and heartfelt guide to Earth for newcomers (read: babies). The illustrators are wonderful (especially that crazy spread with all the animals!), and the writing is sharp and often poignant.

So much to love about Dave Eggers’s What Can a Citizen Do? The language is clear and concise but not without a little humor; the examples of what a citizen can do take a concept that probably seems abstract to most children (citizenship) and make it concrete; it’s also a story about acceptance and belonging and kindness and working together to make the world a better place.

I enjoyed Beatrice Doesn’t Want To, especially Lynn Munsinger’s illustrations. Her facial expressions for Beatrice and her long-suffering older brother are hilarious. It’s the story of a fussy little dog who doesn’t want to accompany her brother to the library after school and how she eventually falls in love with books. Obviously a storyline that I would appreciate!