I’ve been reading graphic novels like mad for Round 1 of Cybils judging. There are around 120 titles nominated for Graphic Novels Round 1, and I am trying to read them all! I do allow myself to abandon after 30 pages if it’s clearly not a serious contender for a finalist, and I’ll be honest: not all nominated titles should have been nominated! But I’ve only abandoned a handful, and my shortlist exploded this week with many, many excellent reads. 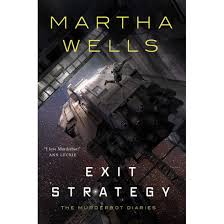 Exit Strategy is the only non-Cybils book I read this week. It’s the final volume in Martha Wells’s four-novella series about Murderbot, a rogue A.I. who has been trying to pass for human to avoid arrest and shutdown. Like the other books in the series, this one is funny and tender and fast-paced, set in a richly imagined world and full of well-developed characters. Not to be read out of order, but do give All Systems Red a try, even if–like me–you think you don’t like sci-fi. 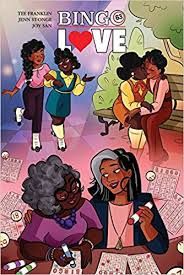 It’s hard not to root for Mari and Hazel, two friends who fall in love as teenagers in 1963 but whose parents force them apart. They meet again fifty years later, both married women with children (and grandchildren on the way), but the sparks fly. They have to decide whether to follow their hearts, leave their husbands, and start new lives. I really wanted to love this book, and I did enjoy the artwork, but the writing is often trite and cliched. “If loving Mari is wrong, then I don’t want to be right.” That kind of thing. The pacing suffers as well, slowing down for pages of soap operatic “should I or shouldn’t I leave my husband” drama and then breezing over several years of life in order to get to the final death scene–which felt like a strange place to end the book.

Quince is a new favorite. Lupe has no idea just what a change her quinceanera is going to bring: for her quince year, she has superpowers! Her grades take a nosedive as she spends all her free time fighting crime and saving the world, all the while disguised as the mysterious Q (in a superhero outfit made by her grandma). Remember how awesome the first couple of seasons of Buffy were? (Ok, all the seasons of Buffy are awesome, but the high school years have a special place in my heart.) Quince has a strong Buffy vibe, only Lupe is a little more fun to root for. A strong voice, plenty of heart and wit, well-developed characters, and bright, charming art.

The Strange is a thought-provoking story about an undocumented immigrant’s experiences in a new country, told from multiple perspectives of those who live with him, work with him, give him assistance, call the police on him. This is a story about fear, intolerance, brief moments of hope, survival. Ruillier’s art style with its childish colored pencil drawings and limited color palette emphasizes the stark and frightening nature of the undocumented immigrant’s experiences. Although it’s very much a story grounded in France (with quotations from Sarkozy and Le Pen), it’s also a story that could take place anywhere–including America.

Brianna comes from a large family of chefs, including her famous father, well-known for his cooking shows on TV, who pits his children against each other in a competition for the family name and wealth. He challenges his children to settle in different cities and start their own restaurants. The child with the most successful restaurant will win. Brianna decides to move to Monster City, and though she has a rocky start, her restaurant is ultimately a big success–until her older brother arrives with his food truck to challenge her to a cook-off and it’s discovered that she has been breaking the law by including forbidden ingredients like flour and sugar in her food. Brianna is a spunky heroine who has to overcome a lot of self-doubt, and the restaurant setting is well-rendered. But I wish that she had won fair and square, made a success of her restaurant without breaking the law. It’s never really explained why flour and sugar are forbidden, but it’s problematic for Brianna to come to Monster City and feed the monsters forbidden ingredients without their knowledge, especially when there is a history of persecution and oppression between humans and monsters (with humans having done the persecuting and oppressing). The villain, Madame Cron, is presented as having a jealous vendetta against Brianna, but Madame Cron’s accusations seem pretty accurate to me.

Escape from Syria is a powerful fictional account of one family who flees their home in Aleppo, struggles to survive as refugees in Lebanon, and finally arrives as immigrants in Canada. Samya Kullab gives us a window into the hopes, feelings, and fears of one family and makes us feel we know them. Escape from Syria would make a terrific paired text with Don Brown’s recent The Unwanted: Stories of the Syrian Refugees. 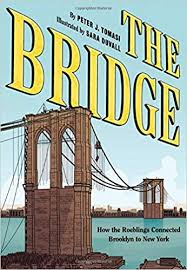 I still find it almost unbelievable that humans can accomplish feats of structural engineering like building bridges, so The Bridge, the story of the Brooklyn Bridge, had me riveted in disbelief and amazement from page 1. It turns out to be a really good story with really good characters who definitely, as author Peter Tomasi points out in the Author’s Note at the end, deserve to have many more books written about them. There is grit and determination and danger and politics and genius, and the whole thing would never have been accomplished without the strong marriage between chief engineer Washington Roebling and Emily Roebling, who steps in to communicate her husband’s plans and orders to his crew when his poor health keeps him housebound. 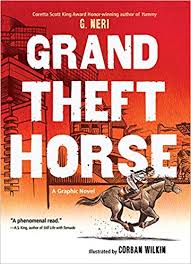 Grand Theft Horse is one of the more unlikely true stories I’ve ever read.  G. Neri was inspired by his cousin’s real-life drama of being arrested and charged with “grand theft horse.” Of course, it wasn’t exactly theft since horse trainer Gail Ruffu was rescuing a race horse she partly owned, and she certainly had grounds for taking the horse and hiding him from her horse racing partners who were drugging him and trying to race him through an injury. It’s sad to me that Ruffu’s humane training methods are considered so heretical in the horse racing world. This book sent me to the Internet to learn more about horse racing, and most of what I discovered about the treatment of racehorses was truly horrifying. In any case, Ruffu’s decision to protect Urgent Envoy cost her everything, including her license to train horses. There is a lot of very compelling plot here–not just the story of Ruffu’s relationships with horses but also the courtroom drama and intrigue as Ruffu tries to make sure her partners never find Urgent Envoy. Ruffu herself is a great character, brave and fierce and determined to do what she knows is right in the face of almost insurmountable odds.  She even teaches herself the law in order to defend herself in court! The story is strong enough that the art could have been pedestrian and it still would have been a good graphic novel, but Corban Wilken does a tremendous job with the art.

The Margins starts off a bit slow but then kicks into overdrive and I raced through to the ending. It begins with Gordy, who has discovered a manuscript that his great grandfather was writing before he was lost at sea. The story is part fantasy, part Moby Dick, and Gordy gets the inspired idea to finish the book and turn it into a graphic novel. He contracts with Charley, a local artist, to do the art. Charley and her girlfriend, Rita, have just moved to Portland, and the story shifts to their relationship as they learn how to live together and get along and find their way in a new city. And then the story takes another turn, as the characters in the graphic novel come to life. This is a clever meditation on creativity and art and how compelling fictional worlds seem so real and, sometimes, like such a preferable escape from reality.

A Girl Called Echo is the first volume in the new Pemmican Wars series about a Metis teen who begins having visions or dreams of the past. She’s sitting in history class but somehow also transported in time to a bison hunt on the prairie. The art is colorful and moody, and there is plenty to interest in the story, but it’s so short (48 pages) and so mysterious at this point that it’s hard to tell where it’s going. 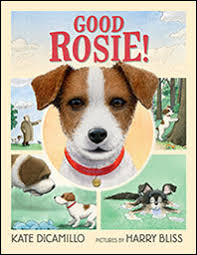 A sweet story about a lonely dog who learns how to make friends. I enjoyed Good Rosie, but it’s not going to stick with me.

What an odd little book! Pluto is upset because it’s been downgraded, so it sets off to discover how scientists could take its planet status away. That would be enough story right there for a short picture book, but somehow dinosaurs, germs, and rocks get thrown into the mix. It’s a blend of the scientific and the silly, with not quite enough of either to give it a clear identity. 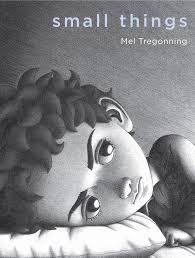 Small Things is a wordless graphic novel picture book about a boy with anxiety. Mel Tregonning brilliantly depicts anxiety as these strange and frightening creatures who seem to bite off pieces of the boy. He feels alone until he discovers that other people have similar worries. That empowers him to reach out and find hope and solace through connection.

A fantastic early reader title with a lovely friendship and sweet humor at its heart. I love Sergio Ruzzier’s work. It feels fresh and new and also like I might have read it as a child in the 1970s.